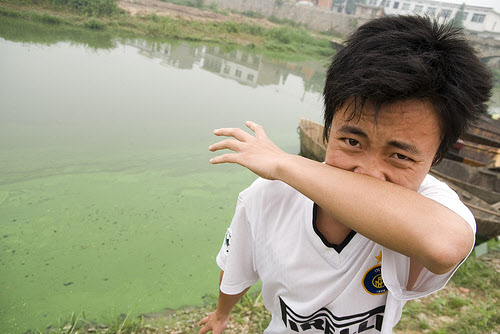 A human population of 11 billion might turn Wisconsin’s gorgeous lakes green. Not green as in environmentally sound, but green as in covered in slimy, stinky, toxic blue-green algae.

Think I’m exaggerating? Bullcrap. Or fertilizer, to be more specific.

Fertilizer – along with better irrigation and improved seed varieties – has allowed American farmers to feed the world. The “Green Revolution” – a history-shifting boost in agricultural production that saved millions from starvation – wouldn’t have happened without chemical help.

Unfortunately, this modern miracle comes with a bad side-effect: toxic algae blooms. Fields are fertilized. Rain washes that fertilizer into waterways. Blue-green algae – also called cyanobacteria – loves fertilizer. It grows so much that ponds and lakes turn pea soup green. The blooms suck up all the oxygen. Other plants and fish die. So too do other animals.

This summer, a Kansas rancher lost 22 cattle when they drank from an infested pond. Dogs die after swimming in the water. People get sick. When blue-green algae blooms close lakes, businesses that cater to families enjoying those lakes also close. Entire economies are affected.

Luckily, there are actions we can take. We can improve farming techniques to reduce fertilizer usage and runoff. We can protect waterways by leaving land around them untilled. And we can make universal contraceptive access a priority.

I know what you’re thinking: “This Seager guy is crazy. What does birth control have to do with blue-green algae?” Here’s what: the planet has slightly more than 7 billion people right now. The United Nations projects that we could add up to another 4 billion by 2050. If there’s one thing that everybody needs, it’s food. America’s farmers provide it. That won’t change – but the number of hungry people they’re feeding will.

There are an estimated 222 million women in developing nations who want to avoid pregnancy but don’t have modern contraception. In the United States, nearly half of pregnancies are unplanned. If we make sure all women have access to family planning, we can slow down population growth, take some pressure off of our farmland, and help reduce the fertilizer flowing into our lakes. It’s not the only action we must take. But it might be the simplest piece to a very complex puzzle.

We’ll never eliminate toxic algae blooms entirely. But with a little hard work and planning – including family planning – we just might keep our lakes blue.

John Seager is President of Population Connection, the nation’s largest grassroots population organization. He can be reached at john@popconnect.org.