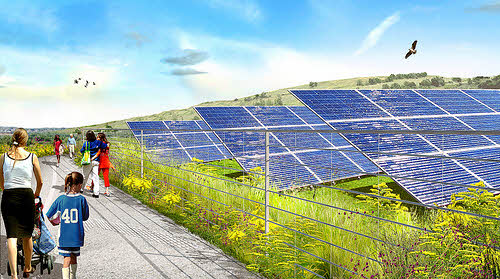 Several years ago over at the Sundance Channel, I got to take a look at the Freshkills Park project, a planned 30-year effort to turn what was once the world’s largest landfill – Staten Island’s Fresh Kills – into New York City’s largest park. Transforming a dump into recreational space is pretty green on the surface, but the plans for Freshkills call for renewal of natural habitat, all certified green building, and, of course, use of renewable energy throughout.

Last week, Mayor Bloomberg made a major announcement related to that last element of the project: St. Peters, MO-based SunEdison will partner with the city to build a huge solar array at the new park. Specifically, the company will lease 47 acres in the park space to build “two photovoltaic systems totaling up to 10 megawatts (MW) in size [that] will utilize between 30,000 and 35,000 high efficiency solar panels…” This installation will increase the city’s renewable energy capacity by 50%.

Scheduled to start in 2015, the construction of the solar arrays will also contribute to the city’s goal of reducing greenhouse gas emissions 30% by 2030.

Big thinking going on in the Big Apple; proud to see a local company involved in this effort. Would love to hear from any of you on the ground in NYC: what are you hearing about the Freshkills project and its green features?