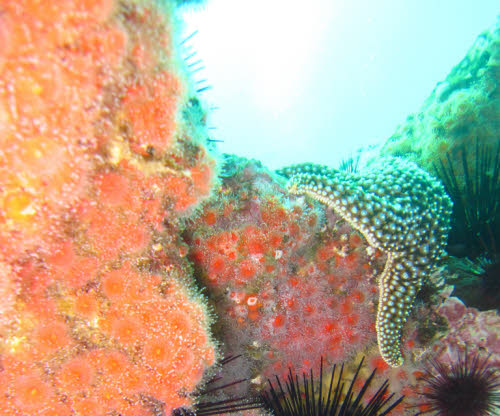 In May 1975, rising concerns about overfishing and deteriorating ocean health prompted scientists and officials from 33 countries to meet in Tokyo for the first global conference on marine parks and reserves. Noting the need for swift action to safeguard more of the sea, the delegates were unanimous in calling for the creation of a global system of marine protected areas (MPAs)—zones explicitly managed for the conservation of aquatic ecosystems.

Today, with oceanic resources more threatened than ever, the world is far from that envisioned MPA network. Although coverage has doubled since 2010, just 2.8 percent of the ocean surface—some 10 million square kilometers (4 million square miles), roughly the size of the United States—is now in designated MPAs. And the level of protection varies. Some MPAs allow seabed mining, for instance, and most MPAs allow at least some fishing. In others, fishing and other destructive activities are off-limits entirely. These “no-take” MPAs, also called marine reserves, are thought to provide the greatest conservation value, yet they account for less than half of the world’s marine protected area.

A wealth of experience and scientific research shows that by protecting all habitats and marine life within their borders, well-managed no-take zones effectively preserve biodiversity and can restore adjacent fisheries, greatly benefiting both ecosystems and the people dependent on them. In general, fish populations increase after a reserve is established, and individual fish grow larger. Heavily overfished species usually show the greatest gains, and the positive results can come quickly.

While there are often concerns that closing fishing grounds will negatively impact access to food and livelihoods, evidence suggests that reserves often have the opposite effect. Because there is no physical boundary, fish may venture out of the MPA to areas where anglers can catch them. Older, larger fish have more offspring, which also can leave the reserve as eggs or larvae, eventually replenishing depleted stocks. The potential to support fisheries has great implications for food security: worldwide some 3 billion people get at least 20 percent of their animal protein from fish, but close to 90 percent of fish stocks are being fished at or beyond sustainable levels. There are also non-fishery benefits. Protected areas can attract more tourist dollars, helping offset MPA management costs. (See Table.)

Surveys of people living near reserves in Fiji, Indonesia, the Philippines, and the Solomon Islands, support this point. Summarized in a report by The Nature Conservancy called Nature’s Investment Bank, the surveys pointed to improved fish catches outside MPA boundaries, increased protein intake, and even poverty alleviation—especially from new jobs in tourism.

Thus marine reserves are widely seen as a crucial tool in the conservation toolkit—one that is sorely needed as pressures on the world’s oceans continue to mount. Take the highly productive coral reefs that provide nurseries for fish, protect shorelines, and support the livelihoods of millions of people. Some 75 percent of the world’s coral reefs are threatened by overfishing, pollution, warming waters, and a host of other hazards.  A 2013 study in Belize showed that protection from fishing and industrial activity bolsters reef resilience: coral reefs in marine reserves there may be six times more likely than unprotected ones to regrow after major disturbances such as hurricanes.

The world’s largest coral reef system, Australia’s Great Barrier Reef, is home to probably the best known MPA, which opened in 1979. Spanning some 340,000 square kilometers, this park boasts incredible biodiversity, including more than 1,600 fish species, and brings in some $4 billion a year from tourism. Zoning plans developed in the 1980s made a scant 4.5 percent of the MPA off-limits to fishing and provided very uneven habitat protection. But in 2004, it was rezoned to better protect all 70 of its distinct habitat types—30 of them reef habitats, and the rest non-reef types such as mangroves. Now at least 20 percent of each of these “bioregions” is no-take and, all told, fishing is banned in one third of the Great Barrier Reef Marine Park.

Nearly all no-take MPAs to date have been small and near to shore, but calls are growing for more set-asides of hundreds of thousands or even millions of square kilometers to create vast buffers around islands and to protect open ocean wilderness areas—and with them, conceivably, the entire life cycles of far-ranging marine species like sea turtles, sharks, and tunas. The Pew Charitable Trusts’ Global Ocean Legacy project has been a prominent champion of the idea, working with scientists and both national and local governments to establish “the first generation of great marine parks around the globe by 2022.” It was integral, for example, in the U.S. designation of the Papahānaumokuākea Marine National Monument in 2006, which protects 362,000 square kilometers around the Northwestern Hawaiian Islands. At the time this was by far the largest no-take marine reserve in the world.

Then in 2010 it was surpassed by another Pew-backed park when the United Kingdom declared a 640,000-square-kilometer reserve—larger than the United Kingdom itself—in the Chagos Archipelago in the Indian Ocean. In 2012, after an aggressive public outreach campaign led by Pew, Australia declared a 1-million-square-kilometer MPA adjacent to the Great Barrier Reef in the Coral Sea, half of it no-take. And Pew is also proposing a park around the Pitcairn Islands in the South Pacific, another U.K. territory, that would add 830,000 square kilometers to the global no-take area.

Not all recent attempts to create large reserves have succeeded. In early November 2013, Russia, Ukraine, and China—worried about possible harm to their fishing interests—scuttled international talks on two massive proposed reserves in the Southern Ocean. This was the third time in a year that countries reached an impasse on the proposals, which would have banned fishing in 2.8 million square kilometers in Antarctic waters. Although proponents will resubmit the reserves for consideration in 2014, prospects look grim after this latest setback.

In addition to expanding the number and area of MPAs worldwide, another marine conservation priority is improving the effectiveness of existing parks. Most MPAs to date lack the trained staff and funding needed to properly manage them, making monitoring and enforcement of restrictions difficult and leading many to be dubbed “paper parks” (that is, protected on paper only). One encouraging attempt to address this problem is the Caribbean Challenge Initiative. With the backing of a $42-million endowment—funded by The Nature Conservancy, the Global Environment Fund, and the German Development Bank—10 Caribbean nations are developing national trust funds to be used solely to improve management of existing parks (land and marine) and to establish new ones that are effective from the start. Funds are set to be disbursed beginning in early 2014, as the countries move ahead on their overall goal of having at least 20 percent of their near-shore marine and coastal area in well-managed MPAs by 2020.

What would it take to run a global network of MPAs? In 2004, a paper published in the Proceedings of the National Academy of Sciences examined the potential costs of administering a worldwide network that would conserve 20 percent or more of the world’s oceans. Based on data for over 80 existing MPAs, the authors conservatively estimated that such a network might cost $12.5 billion annually. What they concluded nearly a decade ago is still true today: we could protect a large chunk of our marine ecosystems for much less than the estimated $20 billion that governments spend to subsidize overfishing each year.

Well-designed and managed MPAs are only part of the puzzle in restoring fisheries and ocean ecosystems. Other important steps include putting stricter catch limits on fisheries, removing harmful fishing subsidies, and dramatically reducing the pollution entering the sea from farms, cities, and industry. Cutting emissions of carbon dioxide, the main greenhouse gas responsible for global warming, will also be essential to minimize the rise in temperatures and changing chemistry already undermining ocean ecosystems. Only by tackling all of these problems simultaneously will we have a decent chance at reversing marine decline.