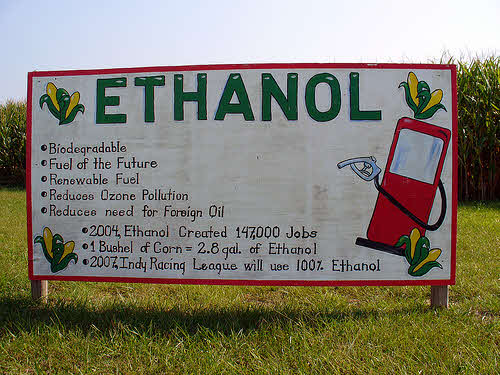 At the time of the Arab oil export embargo in the 1970s, the importing countries were beginning to ask themselves if there were alternatives to oil. In a number of countries, particularly the United States, several in Europe, and Brazil, the idea of growing crops to produce fuel for cars was appealing. The modern biofuels industry was launched.

This was the beginning of what would become one of the great tragedies of history. Brazil was able to create a thriving fuel ethanol program based on sugarcane, a tropical plant. Unfortunately for the rest of the world, however, in the United States the feedstock was corn. Between 1980 and 2005, the amount of grain used to produce fuel ethanol in the United States gradually expanded from 1 million to 41 million tons.

Then came Hurricane Katrina, which disrupted Gulf-based oil refineries and gasoline supply lines in late August 2005. As gasoline prices in the United States quickly climbed to $3 a gallon, the conversion of a $2 bushel of corn, which can be distilled into 2.8 gallons of ethanol, became highly profitable.

The result was a rush to raise capital and build distilleries. From November 2005 through June 2006, ground was broken for a new ethanol plant in the United States every nine days. From July through September, the construction pace accelerated to one every five days. And in October 2006, it was one every three days.

Between 2005 and 2011, the grain used to produce fuel for cars climbed from 41 million to 127 million tons—nearly a third of the U.S. grain harvest. (See Figure 4–1.) The United States is trying to replace oil fields with corn fields to meet part of its automotive fuel needs. The massive diversion of grain to fuel cars has helped drive up food prices, leaving low-income consumers everywhere to suffer some of the most severe food price inflation in history. As of mid-2012, world wheat, corn, and soybean prices were roughly double their historical levels.

The appetite for grain to fuel cars is seemingly insatiable. The grain required to fill a 25-gallon fuel tank of a sport utility vehicle with ethanol just once would feed one person for a whole year. The grain turned into ethanol in the United States in 2011 could have fed, at average world consumption levels, some 400 million people. But even if the entire U.S. grain harvest were turned into ethanol, it would only satisfy 18 percent of current gasoline demand.

With its enormous growth in distilling capacity, the United States quickly overtook Brazil to become the new world leader in biofuels. In 2011, the United States produced 14 billion gallons of ethanol and Brazil produced under 6 billion gallons; together they accounted for 87 percent of world output. The 14 billion gallons of U.S. grain-based ethanol met roughly 6 percent of U.S. gasoline demand. Other countries producing ethanol from food crops, though in relatively small amounts, include China, Canada, France, and Germany.

Although production from oil palms is limited to tropical and subtropical regions, the crop yields much more biodiesel per acre than do temperate-zone oilseeds such as soybeans and rapeseed. However, one disturbing consequence of rising biofuel production is that new oil palm plantations are coming at the expense of tropical forests. And any land that is devoted to producing biofuel crops is not available to produce food.

Not only are biofuels helping raise food prices, and thus increasing the number of hungry people, most make little sense from an energy efficiency perspective. Although ethanol can be produced from any plant, it is much more efficient and much less costly to use sugar- and starch-bearing crops. But even among these crops the efficiency varies widely. The ethanol yield per acre from sugarcane is nearly 600 gallons, a third higher than that from corn. This is partly because sugarcane is grown in tropical and subtropical regions and it grows year-round. Corn, in contrast, has a growing season of 120 days or so.