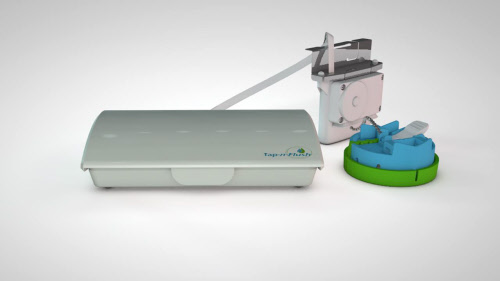 So, I admit it: I’m not particularly handy. Yes, I can paint a wall and such, but if it gets more difficult than that, I’m out of my league. That’s only gotten worse over the last few years with my health issues. So, yes, I was frustrated when I ran into difficulties trying to install a Tap-N-Flush dual flush converter on the main toilet this weekend… but I wasn’t surprised. Rather than thrash around, throw the product against the wall, and swear a lot, I decided “Hey, I’ll bet my readers would like a chance to save water…”

So, we’re doing something we don’t do much here at sustainablog: hosting a giveaway of the Tap-N-Flush the company sent me. Yes, the box is opened, but everything’s there… including the instructions (which I’m sure are fine…).

What is this thing? The Tap-N-Flush is an add on for your toilet’s “guts” that converts your standard appliance into a dual flush model. That is, you can use just the right amount of water for what you need to flush. Dual flush toilets are standard in other parts of the world – I saw a lot of them everywhere in Greece and Finland – but they’re still catching on here. The beauty of the Tap-N-Flush: you don’t have to replace anything. The product’s designed as an add-on to a conventional toilet… and other people have found it really easy to install (yeah, yeah…).

Want to take a shot at winning? Just use the entry form below – I was handy enough to make that work! We’ll take entries through midnight (CST) Monday, May 5th, and announce the winner shortly thereafter. If you’ve got questions, ask ’em… and if you’ve used the Tap-N-Flush, share your experience with us.

UPDATE 5/8/14: We Have a Winner! Patrycja Chudziak of Richmond Hill, NY, won the Tap-n-Flush… we’ll be waiting to hear how much water (and money) she ends up saving. Congratulations!