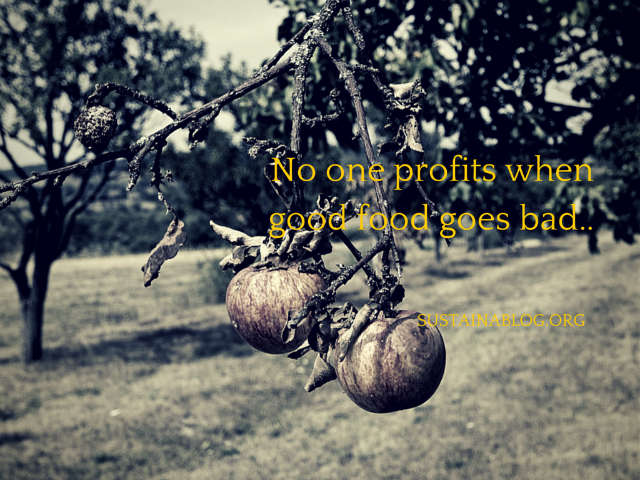 We tend to think about food waste at the end of the farm to table pathway: the food that goes bad in our refrigerators, the portions of meals that don’t get eaten at home or out, the spills, the mistakes… you know what I mean. But an awful lot of food doesn’t even make it to that point: if a piece of produce doesn’t readily conform to retailers’ and consumers’ idea of what it should look like, it often get tossed at some point in the process. It may get separated out from picked items that do look right, or it may be left in the field.

Seems like kind of a silly reason to throw something away, or just leave it to rot, especially when 1 in 6 Americans go hungry. Washington, DC, food anthropologist Elizabeth Bennett witnessed this kind of waste herself at a local “u pick” orchard: according to TriCities.com, the sight of thousands of pounds of fruit on the ground moved her to action.  After confirming the amount of waste by spending some time gleaning apples at a different local orchard, Bennett decided to find a use for this wasted food… and Fruitcycle was born.

A social enterprise, Fruitcycle operates on the principle of “there is no bad fruit” – if it’s edible, it should be eaten. Bennett takes those gleaned apples (which she gets at a lower price than the “pretty” ones), cuts them up, dehydrates them, and packages them. The resulting apple chips are a shelf-stable snack, and, according to the company website, are “tasty and healthy with no fat, added sugars, or artificial ingredients. And they’re gluten-free, dairy-free, nut-free, and paleo, too.” Additionally, the company focuses on hiring “women who have been formerly incarcerated, homeless, or are otherwise disadvantaged.”

Think that’s impressive? So did the judges of Mess Hall’s Launch Pad contest, which awarded Fruitcycle three months of free rent/commercial kitchen access for winning the “audience favorite” award. She’s already made deals with several local retailers in the DC to carry the apple chips.

Know of other companies that procure produce through gleaning, or otherwise make use of produce that would likely get lost somewhere along the way? Share their stories with us…