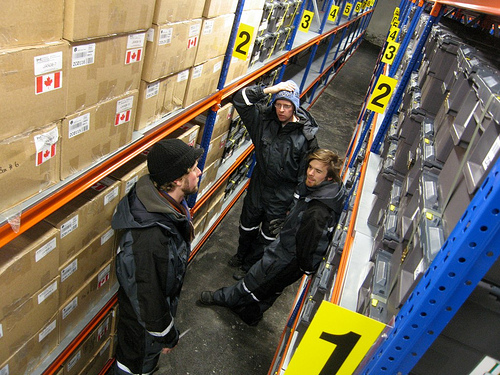 There’s been a buzz about global seed banks in recent news — vaults designed to keep and protect thousands of varieties of seeds in case of some massive global catastrophe. Perhaps most well-known is the Svalbard “Doomsday” Seed Vault, the $9 million facility located 800 miles south of the North Pole, on the Norwegian island of Spitsbergen, where Dornith Doherty was granted access to capture photos of this bizarrely modern, concealed, apocalytpic, biological venture.

In this Wired photo feature, you can see images of some of these truly mysterious seed banks, taken by Doherty during visits to the various vaults.

For Doherty, the Svalbard Seed Vault embodies the contradiction of hope and pessimism inherent to seed-saving activities.

“On the one hand, volunteers and governments from around the world are collaborating to create a global botanical back-up system,” says Doherty, “But on the other hand, the gravity of climate change and political instability creates the need for an inaccessible ark.”

Most interesting to me about this particular feature (other than some of the surreal photos) is the critique of seed banks by Sunita Rao, who questions the narrow view of a seed bank as a physical cryogenic facility, instead of actual healthy land with local farmers maintaining and preserving local varieties of seeds:

Sunita Rao is among those who question the motives of these corporations and the relevance of the seed vault to developing-world farmers. She’s an Adjunct Fellow at the Ashoka Trust for Research in Ecology and the Environment in Bangalore, India and founder Trustee of Vanastree in Sirsi, India.

“The Svalbard Seed Bank means very little to small, local groups like Vanastree, many of whose members will not have heard of this initiative and will not impact their lives in a tangible way,” says Rao. “Seed conservation relates closely to maintaining ecological diversity in a region. Seed conservation should not have the narrow view of a seed bank as a cryogenic facility but look at a landscape as being able of functioning as a seed bank.”

Check out the feature for more about seed banks.