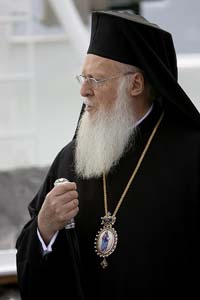 Known as the “Green Patriarch,” Bartholomew I, the leader of 300 million Orthodox Christians, celebrates his 17th birthday this Leap Day. At age 68, his health has been slowly declining for decades. This has led supporters of his environmental achievements to begin speculating about whether his successor will continue his green legacy.

Bartholomew first earned his reputation with the statement, “Crime against the natural world is a sin.” His grandest endeavor was inviting 200 scientists, journalists, and political leaders to hang out with him on a cruise ship. They traveled around the Adriatic Sea to observe the ecological degradation taking place. During the symposium, he persuaded Pope John Paul II to adopt his agenda.

This achievement symbolized what he has been able to do, bringing together the Orthodox Church and the Roman Catholic Church, as well as the scientific and religious communities. Both of these pairs have found themselves in opposition to one another, but Bartholomew I describes his work as the “green bridge” uniting everyone, religious and non-religious. He has received a U.S Congressional Gold Medal and the Sophie Prize for his efforts.

There is a conciliar process to select Bartholomew I’s successor, much like the Roman Catholic Church’s selection of popes. The future of the office is uncertain right now, however, due to the dwindling number of Orthodox Christians in Turkey and restrictions that the Turkish government places on who can be Patriarch. There has been discussion of moving the office to another country, after nearly seventeen centuries in Constantinople. It will be interesting to see whether the next Ecumenical Patriarch, wherever he happens to be located, continues the green mission of his predecessor.

Bartholomew I was #1 in Grist’s “15 Green Religious Leaders” last July.