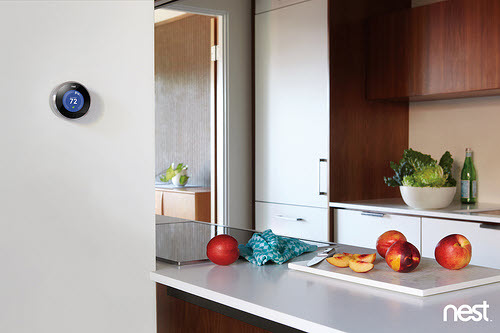 You helped damage the planet. OK, so maybe you’re not totally to blame. I mean, we’ve all had a hand in polluting the planet. However, now’s your chance to redeem yourself. And much like Ironman, you get to do it through the power of awesome technology. Here are seven new energy- and resource-saving gadgets that will help you correct some of humanity’s biggest mistakes.

1. Learning Thermostat. Thermostats are already pretty smart as far as things like that go. I mean, they can monitor and maintain the temperature of your house – what more do we need? Well, the people who designed the Learning Thermostat have stumbled upon something that we never knew we always wanted. It’s basically a thermostat that performs a thermostat’s job, but as it does so, it learns. Do you like it colder at night? Do you leave during the day? Does the sun hit the house at approximately 10:00 AM every morning in the winter, necessitating a decrease in furnace output? A learning thermostat figures these things out as it goes, and adjusts its programing accordingly. The end result is a smart device that conserves energy all while better serving your needs. Home automation companies like Vivint, Nest, and others have created a way to control the whole thing from anywhere in the world with your mobile smart device.

2. Roadrunner II Showerhead. One thing we can all do to help save the environment is cut down on the time we spend in the shower. Of course, no one wants to do that, because the shower feels really good, so we need another solution. The Roadrunner II (its predecessor must have been caught by Wile E Coyote) is an Evolve brand showerhead that cuts back on wasted water while leaving the experience fully intact. The Roadrunner II saves about eight gallons of water for every five minutes of use, but you’d never be able to tell—until you get your utility bill.

3. Extech High Temperature IR Thermometer 42540. Much of the energy used in the home goes into climate control. Maybe it’s our lack of fur, but humans just never seem to want to be the same temperature as our surrounding environment. As such, it’s important to make sure that all of our precious heated/cooled air doesn’t escape out into the harsh wilds through leaks in our windows, doors, or ventilation ducts. Just walk around the house holding the Extech High Temperature IR Thermometer and stare at the readout like a ghostbuster searching for a ghost, and you’ll be able to locate the leaks in no time. Fix them up, and you’ll be wasting 20% less energy in your home.

4. Philips L Prize LED Light bulbs. Yes, light bulbs. They may not look like much, but these bulbs can do wonders for the environment. For one thing, they create less waste; you’ll only have to replace them every decade or so. See, conventional bulbs can function for about 5,000 hours, and fluorescent bulbs last for about twice as long. These LEDs work for approximately 100,000 hours, and that’s assuming that you run them nonstop (which you probably shouldn’t do if you want to save energy). Additionally, LEDs are about 60% more efficient than conventional bulbs, converting around 80% of the energy that they use into visible light (rather than heat). LED bulbs come standard with certain new home automation packages, or you can just go pick up a few at your local home improvement store.

5. Power Conscience Energy Usage Meter. For most homeowners, the numbers on our electric bills don’t really correspond to anything specific in our homes. We know that we’re wasting energy. We know that we need to stop. We just don’t know where to start. The Power Conscience Energy Usage Meter takes those numbers and turns them into something that we can see. Just take a quick look at it mounted on your wall. The more energy you’re currently using, the brighter the LED lights on its surface shine. So, you’ll know when it’s time to unplug some appliances and turn off the television. Oh, and the device also displays the price you’re paying for electricity, just as a bit of added incentive.

6. iGo Green Power Smart Tower. Guess what? Your microwave is wasting power right now. So is your toaster, coffee maker, television, radio, and any other devices that are plugged in but not actually running at this very second. These appliances suck, and I mean that literally; they suck power out of your outlets and don’t even use it. This is called “phantom power drain,” and it’s the worst kind of wasted energy. However, you can put a stake through the heart of those vampire appliances (I don’t mean that literally) by getting the iGo Green Power Smart Tower. The Power Tower is basically an advanced powerstrip that you can plug a number of devices into, and it will eliminate the phantom drain completely.

7. Veos Kinetic Energy Harnessing Orb. It may sound like Kryptonian technology, but the fact is that the Veos Orb is made from 100% earth science. The idea is that clothing driers eat up a whole lot of energy. The orb is thus placed inside the dryer during a cycle, and all of the jostling and motion charges up its batteries through some advanced bit of engineering that I’m not even going to attempt to figure out (in fact, let’s just call it sorcery). Once the load is done, you simply dump that extra energy back into the power grid (again, don’t ask me how), and use it for anything you want. Obviously this one isn’t quite ready for the market yet, but who knows? In a few years we might all be harvesting energy from our driers and carrying magical energy orbs around with us to charge our smartphones. Yes, you ruined the planet, but with these devices and a few others like them, you’ll be able to give enough back to make up for it.

David Glenn is technology and green enthusiast with over 30 years of experience owning his own home-building business. Connect with him on Twitter @davidglenn97.