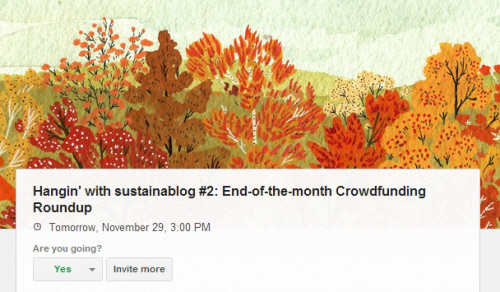 Noticed that all of us in the blogosphere, green or otherwise, really like crowdfunding projects? Yes, we do! In some cases (such as Triplepundit’s planned series on the sharing economy), we’ve figured out that there’s a new method for funding content out there, and we want to support it. But even more important, I think, is that an awful lot of really creative projects end up on Kickstarter, Indiegogo, or similar sites. If you’ve got something a bit outside the norm for which you need money, the crowd’s the place to go… and we bloggers just love “outside the norm.”

So, on this week’s Hangin’ with sustainablog Hangout on Air at Google+, we’ll be discussing cool green crowdfunding projects… whether they’re ours, a friend or colleague’s, or just something we came across and liked. Several creators of current projects will join us, as well as members of the Important Media team (including Scott Cooney, who’s run a successful Kickstarter project).

Want to promote a crowdfunded project? Or see what others are doing/promoting? Join us tomorrow at 3pm Central. If this one goes well, we’ll probably make this a regular feature.