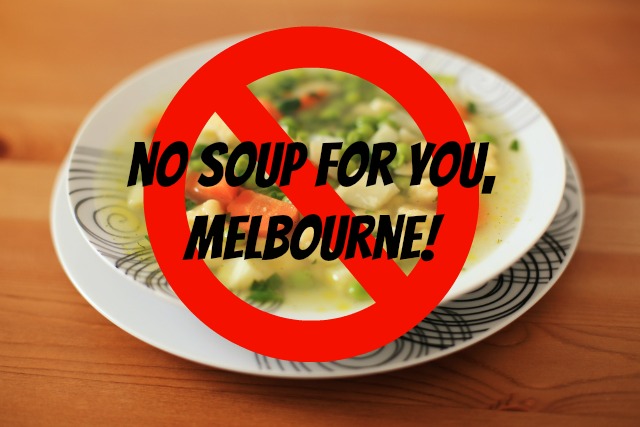 Melbourne soup restaurant Brothi was more than a pop-up concept –  Joost Bakker’s soup restaurant collected food scraps from other Melbourne, Australia eateries and made them into soups. You might expect that a run-in with the city government would involve misunderstandings around food safety and handling, but that’s not what pushed Brothi out of business. Rather, their compost bin got them in trouble… really.

Steve Hanley at sister site Ecolocalizer has the details on this one. Let’s hope Melbourne citizens have a bit more creativity than their elected representatives, and demonstrate it in municipal elections…

Brothi is a zero waste restaurant in Melbourne, Australia that specializes in soup. It collects food waste from high end eateries in the city and uses it to make broth. It also composts its own food scraps. Owner Joost Bakker told Melbourne Age recently that he established the café in response to the huge volume of waste generated by Melbourne’s hospitality industry. “My idea behind the business was to showcase that you could have a hospitality business that can have zero waste,” he said.

His restaurant has attracted attention all around the world as a leader in the zero waste movement. It has also attracted attention from the Melbourne City Council. Brothi relies on a food waste composter located in an alley behind the restaurant. The composter is about the size of a conventional dumpster — of which there are many in the same alley. But the city wants Bakker to put a fence around his composter, sign a complex legal contract and pay it a fee of AUS $12,500. After years of wrangling, Bakker refused the council’s demands. Last month, he was served with an eviction notice.

“I’m incredibly proud of what we have achieved. In three years there were no wheelie bin [dumpster] collections, we turned almost 140 tonnes of organic waste (equivalent to 7 garbage trucks) into 20 tonnes of nutrient rich compost and best of all I feel we have started a worldwide movement that’s got many restaurants now separating their organic waste and providing natural fertilizers for our future food,” Bakker says.

Why would politicians want to stifle a creative businessman who is showing the world how to run a sustainable, zero waste restaurant? Dumpsters in alleyways are a normal part of urban living. Why would a composter the size of an ordinary dumpster stored in an alleyway filled with dumpsters give the city council heartburn?

New technology always makes some people fearful. That’s what Mary Shelley was trying to tell us when she wrote Frankenstein. Except in this case, it is not villagers carrying pitchforks assaulting the unknown, it is venial government minions carrying briefcases filled with legal documents.

Melbourne should be promoting itself as a city at the forefront of a new age of sustainable living. Instead, it has left a bad taste in the mouths of many. Let’s hope the citizens of Melbourne keep that in mind the next time elections for city council are scheduled.