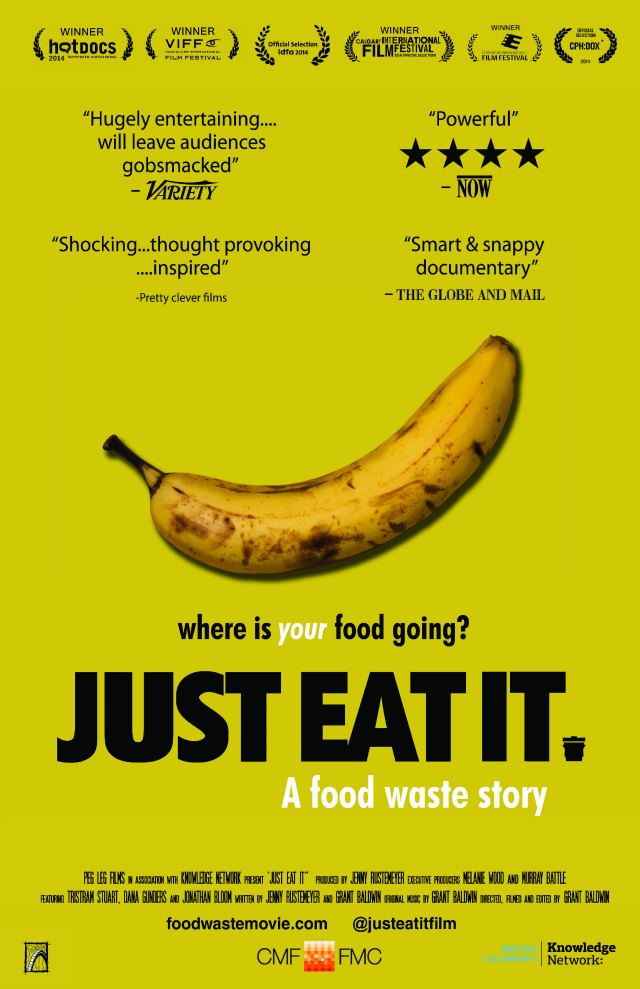 We’re obsessed with food! It’s a part of our celebrations, entertainment, religions and even mourning. Yet, nearly half (40 percent) of all food in America is wasted. To some this may seem like a minor issue in comparison to others, but filmmakers and food lovers Grant Baldwin and Jen Rustemeyer are fed up with our “throw-away society.”

In Just Eat It, a 74-minute documentary, the pair explores food waste from farm fields, through stores, and in their own fridges. They stop grocery shopping, and instead live only on the food found in the trash. As you may expect, their journeys are filled with lots of highs and lows. Could you imagine how they must have felt going cold turkey from browsing supermarket aisles to solely dumpster diving?

The film also features interviews with TED lecturer, author and activist Tristram Stuart and well-known author Jonathan Bloom. It’s receiving rave reviews for being a great cinematic blend of comedy and education. But you don’t have to take our word for it. You can watch the trailer for Just Eat It here, or in its entirety on MSNBC on April 22 at 10 p.m. Eastern. It’ll be the film’s television debut to an American audience, so let me know what do you think of the film in the comment section. In the meantime, I thought it’d be helpful to find out what’s being done now to minimize wastefulness.

What Are We Doing About Food Waste?

If you listen carefully to the wording at the end of the trailer, you’ll hear the film’s director Baldwin say “wasting food is not only widespread, but it’s condoned.” Unfortunately, this sentiment accurately describes the majority, but there are some who are tirelessly working to do their part NOT to contribute to this global problem.

In the “Second Helpings” section of the film’s website, stories of inspiring food waste initiatives and amazing food rescue organizations are spotlighted. Rub & Stub, a restaurant in Copenhagen, Demark, “rescues” food from the trash. They serve donations from supermarkets and foods that can’t be cooked at local soup kitchens. There also is very limited plate waste, as the restaurant serves smaller portions, and guests are welcomed to ask for seconds if they’re still hungry (free of charge of course). We’re seeing similar trends of zero-waste restaurants and programs to turn food waste into meals for hungry people throughout the United States as well.

Would you go see a movie about food waste? How do you avoid wasting food at home?

Image courtesy of Just Eat It