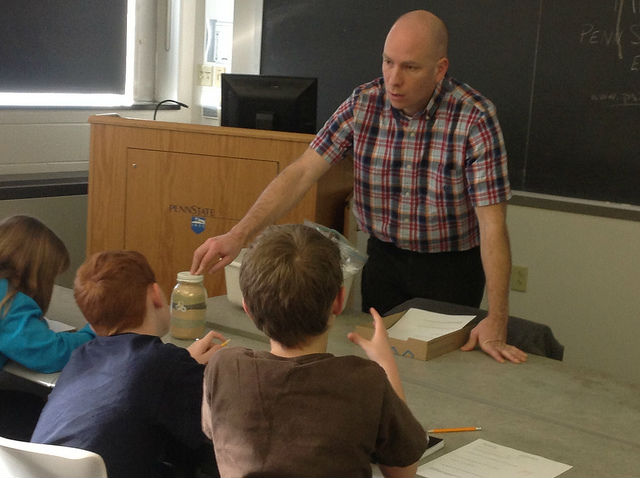 Editor’s note: Once upon a time, political arguments over the content of science education focused on a single topic: evolution.While it would be wonderful to think that such debates ended with the Scopes Monkey Trial, I live in Missouri… where some members of our legislature still think our science classrooms are the proper places for ideological debates. Evolution, of course, isn’t alone anymore: climate change now joins it as a settled scientific concept that a very vocal (and generally uninformed) minority insists still requires debate.

The deniers aren’t going away: those whiffs of conspiracy they smell are just too intoxicating. In the meantime, though, we can make sure that schoolchildren are getting real science in their science classrooms. Rep. Mike Honda (D-California) wants to make sure that all American students have access to climate change facts, and has introduced a bill to make this happen. The Alliance for Climate Education asked Rep. Honda to explain his motivations for the Climate Change Education Act; the piece below is his response to that request.

While some members of Congress debate the scientific facts of climate change, students are weighing the evidence and deciding for themselves. One student in my district, Brandon Truong, a youth leader with the Alliance for Climate Education (ACE), questions why there is still so much public debate when the scientific evidence is so clear.

“What makes me so different from the average person when it comes to climate change?” he asks. The answer: “Well, nothing — really.”

Brandon grew up in Fremont, CA. He admits that he was, like a lot of his peers, unaware of many social issues that affected his community — including climate change. He says it was hard for him to decide which side of the “debate” to believe.

“Only after starting high school did I learn how to differentiate between credible and non-credible information from my teachers and organizations like ACE, which works to educate high school students about climate change,” Brandon says.

“At Irvington High School, which I graduated from this spring, seniors are required to do a project called QUEST. This project entails identifying a social issue, doing research, writing papers, and finally giving a presentation. This dynamic opportunity gave me the chance to gain a deeper understanding of climate change, and maybe even inspire some of my peers to take action with me. In the midst of my research and work with ACE, I was excited to learn that my Congressman, Mike Honda, had proposed a bill regarding climate change education.”

Earlier this year, I introduced the Climate Change Education Act. This bill will allow students across the country access to science based climate change education. The act will create a Climate Change Education Program to broaden the understanding of human-induced climate change, possible long and short-term consequences, and potential solutions. The program will include supporting teacher training in STEM fields to incorporate climate change science into K-12 curricula, and improving quality and access to higher education for green collar jobs and public education. As Brandon observes, educating people about climate change is just the first of many steps we need to take as a nation to address climate change.

“Millions of students, like me, currently go to school in states where teaching climate science is not mandatory in school curriculum,” Brandon adds. “Luckily, I live in California — I’m given the opportunity to have a 21st century science education. But, what about kids in other states? Don’t they have the same right to climate science education? My generation can’t be expected to solve a problem of the magnitude of climate change if we’re never given the opportunity to learn about it.”

As a member of the Safe Climate Caucus, I pledged to work together with the other 39 members to end the conspiracy of silence in Congress about the dangers of climate change. Students like Brandon inspire me to continue to keep the discussion on climate change going. We need more young leaders like him to truly begin to change the dialog on climate change.

“As for me, learning about, and acting on, this issue has inspired me to pursue higher education in the field of Environmental Science and Biology at UC-Santa Cruz,” Brandon says, “and be more aware of my and my family’s habits as consumers. As I sit here today and write this, I hope that you will consider the possibility of something different and better than what we have today. Let’s work together, as we did in the past, to pave the way for our future generations.”

With this he leaves me, and hopefully others who speak out about climate change in Congress, a little hope for the future.

This post is supported by The Alliance for Climate Education