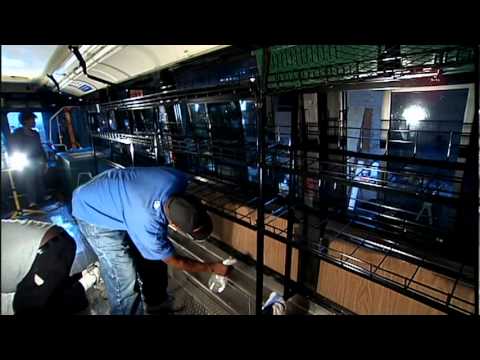 How can a community deal with food deserts, or urban areas without ready access to a variety of healthy, fresh foods? Convincing grocery chain to enter these often impoverished neighborhoods is one idea; urban farming is another (that’s really taken off). Chicago’s Food Desert Network has just launched yet another alternative: the Fresh Moves Mobile Produce Mart.

Think of it as the farmers market meets the lunch truck. The City of Chicago sold the organization a decommissioned bus (for $1) which they (with the help of Architecture for Humanity) reconfigured into a rolling produce market. Fresh Moves made its first venture out into the Lawndale neighborhood last week… you can see the launch (including the end of the bus upgrades) in the video above.

Interested in learning more about this idea? Crew member Dara Cooper sat down for an interview with Mindful Metropolis, and discussed the business model, produce sourcing, and the green features of the bus.

Seems like a good addition to current approaches to bringing fresh food into neighborhoods that don’t have ready access to it… let me know what you think.