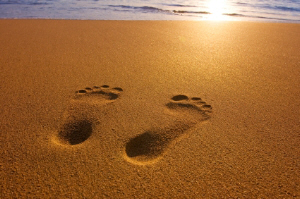 Change your lightbulbs, buy local food, keep your tires properly inflated: all of us in the green publishing space, both online and off, promote such actions as ways for all of us to live greener lives, and, more specifically, to cut our carbon footprints. “Low-hanging fruit” approaches to personal sustainability appeal to us because of their simplicity: we don’t have to make major changes in our lives to feel like we’re making a difference. As we attempt to reach beyond the “green” audience to people who are still “testing the waters,” and who are intimidated by the notion that “going green” means making major sacrifices, tips provide a valuable introduction to lowering one’s personal impact.

Still, the “simple actions” approach to sustainability also runs the risk of becoming simplistic, and even moralistic. Many of us are probably guilty of looking aghast at someone when we find out they don’t recycle, or buy their produce from the neighborhood farmers’ market. “It’s so simple,” we tell ourselves. We feel justified, then, in judging others, perhaps harshly, for the actions they don’t take.

In the latest issue of The New Yorker (published today), writer Michael Specter takes a look at the “simple” actions not only taken by individuals and families, but also promoted by the business world to consumers. British supermarket chain Tesco, for instance, has announced it will look for an easy method for identifying the carbon footprint of the products it sells. Walkers crisps (potato chips) already carry such a label. These are steps forward, no doubt, in providing information that consumers want. But, as Specter points out, there’s nothing simple about determining the carbon footprint of a product:

In order to develop the label for Walkers, researchers had to calculate the amount of energy required to plant seeds for the ingredients (sunflower oil and potatoes), as well as to make the fertilizers and pesticides used on those potatoes. Next, they factored in the energy required for diesel tractors to collect the potatoes, then the effects of chopping, cleaning, storing, and bagging them. The packaging and printing processes also emit carbon dioxide and other greenhouse gases, as does the petroleum used to deliver those crisps to stores. Finally, the research team assessed the impact of throwing the empty bag in the trash, collecting the garbage in a truck, driving to a landfill, and burying them. In the end, the researchers—from the Carbon Trust—found that seventy-five grams of greenhouse gases are expended in the production of every individual-size bag of potato chips.

Potato chips are relatively simple because the list of ingredients is short. Once we move into food products with more ingredients, the process becomes much more complex. Of course, all of this ignores the nutritional content, which can create a real conundrum for a concerned shopper: what if a product has a small carbon footprint, but is high in fat and sodium? On what measurement of “goodness” does a consumer rely then?

Specter’s point isn’t that shoppers shouldn’t feel good about buying products with a small footprint, but, rather, that the criteria by which we make such judgments are often oversimplified. Take “food miles,” for instance (a concept I’ve discussed): does closer to home always mean a smaller footprint? According to Specter, not if we consistently analyze the lifecycle of a product:

The environmental burden imposed by importing apples from New Zealand to Northern Europe or New York can be lower than if the apples were raised fifty miles away. “In New Zealand, they have more sunshine than in the U.K., which helps productivity,” [agricultural researcher Terry] Williams explained. That means the yield of New Zealand apples far exceeds the yield of those grown in northern climates, so the energy required for farmers to grow the crop is correspondingly lower. It also helps that the electricity in New Zealand is mostly generated by renewable sources, none of which emit large amounts of CO₂.

While this doesn’t take into account other benefits of locally-produced food (freshness, lack of preservatives, connections with the sources of our food), the carbon equation is much more complex than “food miles” would have us believe.

Williams further complicates his own argument by noting that, even as we strive to create more transparency about the impact of the products we buy, informed consumption is only one piece of the puzzle: “Personal choices, no matter how virtuous, cannot do enough. It will also take laws and money.” Both government and business have larger roles to play in determining how the costs of carbon emissions figure into the global social and economic picture. While tying a price to carbon emissions is critical, can the private sector do this on its own through institutions like the Chicago Carbon Exchange? Or are government-imposed ceilings on carbon emissions necessary? Doesn’t putting a price on carbon mean that it’s OK to pollute if you can afford to do so? And how does the developing world play into such strategies? Do we run the risk of creating a system of “climate colonialism,” where poor nations must develop along prescribed paths in order to balance the impact of Western-style development? Even if rich nations pay poorer ones to maintain forests and other “carbon sinks,” doesn’t this still amount to a mindset of “we know what’s best for you?”

None of these questions are answered easily, but it’s critical that we engage with them as we step up to the challenges of climate change, water shortages, loss of biodiversity, and other environmental crises. Ecology is a study of complexity, and trying to deal with ecological issues in a simple manner is bound to come back and bite us (just think of all the hubbub over corn-based ethanol as a major weapon in the fight against climate change).

So, do we stop publishing the tips, and praising companies for green labeling strategies? No… again, I think these methods are useful for bringing others on board, at least in terms of their actions and purchasing choices. As we do these things, though, we have to make sure not to fall into simple thinking as we promote simple solutions. Tips, simple actions, and greener purchasing choices can engage and empower others, but we can’t lead either “green newbies” or ourselves to believe that they’ll provide the answers for the complex problems facing us, or that going green doesn’t require some recognition of the intricacy of our footprints.