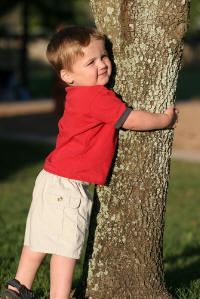 Editor’s note: You may take a look at Justin’s bio and think “Oh, no! Not another English Ph.D.!” Yep, we definitely found ourselves with a lot in common when he applied to write for Green Options Media. But I invited Justin to join us not because of his sterling academic credentials (though they are impressive); rather, I really enjoyed the essay-style pieces he submitted as samples (which were written for radio). Please welcome Justin on board!

You often hear that the first step to overcoming an addiction is to admit you have a problem. Well, I admit to being…an environmentalist. I admit that just one glimpse of the bluetiful Blue Ridge Mountains, just one note of the Rivanna River’s murmured melody, turns my blood from red to blue and green. I hug trees. I go cuckoo for birds. I recycle. I drive a hybrid. So yes: I am an environmentalist.

But I understand that not everyone else suffers from my addiction or even sympathizes with my condition. This resistance to environmentalism was brought home to me recently during one of the composition courses I teach. After asking my students to write on the topic of “Humanity’s responsibility for the Earth,” one of them first commented quite extensively on how humans impact the environment. And then: “But I’m still not buying a Prius.”

But, in truth, we need not forsake modernity or take out another mortgage in order to afford new ultra-efficient gadgets. Little things can have big impacts, too: tossing that can or bottle in a recycling bin rather than a trashcan, replacing an incandescent bulb with a compact fluorescent, bringing your own bag to the grocery store.

A second myth is that environmentalism is like reading the obituary page unto eternity: nothing but gloom, doom, disaster, and death. We see images of mountaintops and glaciers simply erased. We see forests felled and rivers drained dry. We see polar bears paddling in an endless Arctic Ocean. These sorts of things can shatter both your heart and your ability to hope for our future. Even worse, such hopelessness easily leads to the “What can I do?” syndrome in which any changes, small or large, seem futile.

But, in truth, environmentalism is mostly about the amazing power and glory of nature. Indeed, environmentalism means luxuriating in the abundance of beauty lying just beyond your door. It is like a life lived within a Proust novel: every thing, every moment, is just dripping with sensuality.

One other myth is that environmentalism is some sort of contagious disease whose main symptom is a smug clique mentality, with side effects ranging from mildly annoying uppity behavior to slinging red paint, destroying property, and even homicide.

But, in truth, this smugly antagonistic environmentalism is by far the worst pollution: the spewing out of toxic deeds, words, thoughts, and energy that raise the temperature of our warming planet ever higher. I believe that environmentalism is about loving kindness—for the Earth and its inhabitants, one and all and all as one…living community, that is. I believe that the real green movement, the greenness that can lower our global thermostat, is a green with heart.

We have so many myths today. We can explode the myths of environmentalism—these myths of costliness, gloominess, and smugness—much as we did the one of the monster under the bed: with self-education and a few mature actions. Yes, the changes on our planet may leave us wanting to hide under the covers. But sometimes we have to grow up. Sometimes we have to drop the myths and be the change.

What other myths of environmentalism are out there nowadays? How do they inhibit change and the embrace of an environmental consciousness? How can we overcome them?