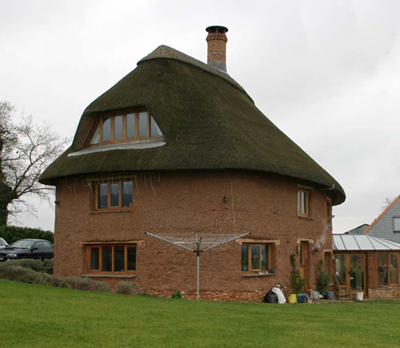 There’s a growing ecological awareness in all aspects of daily life, but some of our newfangled environmental actions have already been in practice for hundreds (or thousands) or years. “Green building” is an architectural movement that attempts to take the environment more closely into account in designing buildings, but the movement is generally very commercial.

Natural building is another form of more ecologically sensitive building techniques that is practiced by owner-builders and is even more spiritually focused on building healthy houses out of local and natural materials, including straw bales, adobe, cob, and other forms of earth.

However, building natural homes out of earthen materials is nothing new, as it has been practiced all over the globe for many hundreds of years, and David Sheen’s documentary, First Earth: Uncompromising Ecological Architecture traces some of the history of earthen architecture up until the present day, in places where people are attempting to bring sustainable forms of building back into mainstream consciousness.

FIRST EARTH is a documentary about the movement towards a massive paradigm shift for shelter — building healthy houses in the old ways, out of the very earth itself, and living together like in the old days, by recreating villages. It is a sprawling film, shot on location from the West Coast to West Africa. An audiovisual manifesto filmed over the course of 4 years and 4 continents, FIRST EARTH makes the case that earthen homes are the healthiest housing in the world; and that since it still takes a village to raise a healthy child, it is incumbent upon us to transform our suburban sprawl into ecovillages, a new North American dream.

Building eco-friendly homes with natural materials has a long history and First Earth does an excellent job of highlighting some of the history of earthen building. Building with straw bales, cob, and adobe are making a big comeback in more industrialized cultures, and it’s exciting to imagine a future where more buildings are built from local and natural materials, instead of materials that are manufactured in factories and shipped great distances, causing huge amounts of ecological damage.

This documentary is an exciting introduction to the hows, whys, and wheres of natural building. Check out the film for free online!

Want to try out this kind of building yourself? Consider joining the folks at New Jura for a natural building internship.