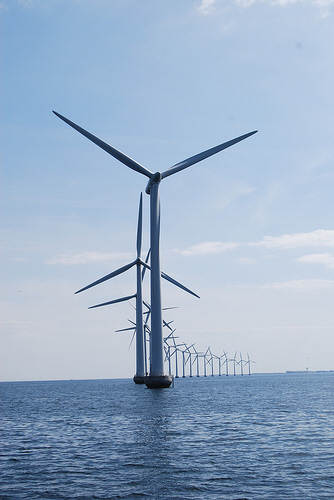 Even though the U.S automobile fleet shrank by 4 million vehicles last year, cars will not disappear completely any time soon. However, the fleet can be cleaned up by marrying the electric and plug-in hybrid electric vehicles now starting to come to market to renewably-produced electricity. The U.S. Pacific Northwest National Laboratory estimates that the current electrical infrastructure could power over 80 percent of the U.S. car fleet, relying largely on off-peak electricity as cars are charged at night. Upgrading to a stronger, smarter, and interconnected national grid that taps into the country’s enormous wind, solar, and geothermal resources completes the transition.

To date, almost all the offshore wind action has been in Europe, but that may soon be changing. China and Japan have just begun developing offshore wind. With the recent approval of the Cape Wind project off the coast of Massachusetts, along with proposals by Delaware, New Jersey, Rhode Island, and other states, the United States may join the game as well.

Unlike oil, wind is widely-distributed and clean; it does not spill or disrupt climate. It is also becoming increasingly cheap. With wind, we have a well that will not run dry.

What’s the best way to contribute to a shift away from oil? Stop using as much of it. We’ve got bikes from Fuji, Raleigh, Bianchi, and Jamis for your car-free transportation.