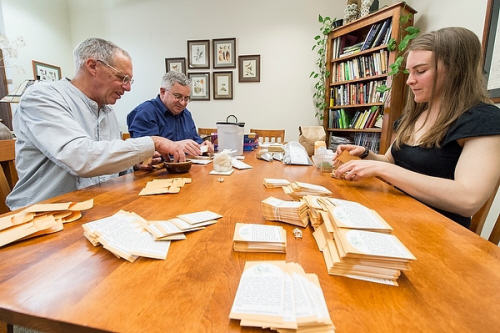 After a life-and-death experience several years ago, I made a commitment to myself: no more posts on genetic modification! It’s such a charged topic, and I just don’t need the stress… I’m going to break that commitment today, because I came across a concept that may do some bridge-building between those supportive of GMO technology and those opposed to it: open source seeds.

I’ve wondered for quite some time if adding some transparency, and taking the the proprietary aspects out of, genetic modification might quell some of the discontent around GMOs. While I know there still are concerns about introducing new genetic materials into the environment,  I also know that a lot of resistance to genetic modification comes from the fact that nearly all of the work done in this field, and nearly all of the products developed from it, take place in corporate labs that are off-limit to public scrutiny.

So, I was encouraged when I came across the Open Source Seed Initiative on NPR’s website this morning. The concept is pretty simple: the Initiative asks users of the seeds it distributes to abide by a pledge:

This Open Source Seed pledge is intended to ensure your freedom to use the seed contained herein in any way you choose, and to make sure those freedoms are enjoyed by all subsequent users. By opening this packet, you pledge that you will not restrict others’ use of these seeds and their derivatives by patents, licenses, or any other means. You pledge that if you transfer these seeds or their derivatives they will also be accompanied by this pledge.

So to answer one question that may have come up, no: these seeds aren’t necessarily free from genetic modification. They are free from any kind of “intellectual property” limitations, though: anyone who purchases or otherwise acquires them can plant them, crossbreed them with other varieties, or even play around with the seeds’ genome. They just have to be willing to share whatever they do openly. As with open source software, the idea plays on the notion of “crowdsourcing”: many people adding their ideas and experiments will create the best outcome, and a work is always in progress/open to improvement.

I know many of you are opposed to genetic modification on a number of principles: does this kind of “open source” approach allay your opposition at all? For those of you supportive of GMO technology: do you think this approach has promise? Or do the economics of it just not work (as I know developing seeds is an expensive proposition)? I know these are simple questions on a complex topic, but I’d love to hear more.

Want to try some of these seeds out? They’re being officially “launched” today in Madison, Wisconsin in conjunction with the Via Campesina global day of action. If you’d like to try some out, two seed companies will be adding some of them in this year’s catalog: High Mowing Organic Seeds, and Wild Garden Seed. It looks like only High Mowing has a variety currently available: the Midnight Lightening zucchini.