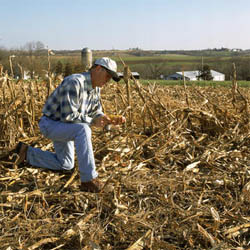 Today’s post is by Dr. Bill Chameides, dean of the Nicholas School of the Environment and lead author of the forthcoming blog The Green Grok. This is the second post in a 2-part series on biofuels.

Last week’s topic was why corn ethanol is an environmental loser.

But are all biofuels losers? No. Some can be winners. One of those is called cellulosic ethanol.

What Is Cellulosic Ethanol?

All ethanol — whether it is corn or cellulosic — is the same chemical compound: C2H5OH. You might recall from elementary chemistry courses that the “OH” group at the end of the formula indicates that the compound is an “alcohol.” Alcohols can have varying numbers of carbon atoms. Alcohol with two carbon atoms is called “ethanol.” The other alcohols are generally too toxic to be ingested, and thus ethanol has been the libation of choice down through the ages. (Ethanol used as fuel is rendered nonpotable.)

So corn ethanol and cellulosic ethanol don’t signify different types of ethanol, but rather the different material (or feedstocks) used to produce them.

Why Cellulosic Ethanol Can Be an Environmental Winner

Cellulosic ethanol is a different story. Most of the dry biomass — as much as 80% — is typically made up of cellulosic material — the stuff that makes the plant sturdy. So you can make a lot of ethanol using a plant’s cellulose instead of its sugars and starches. (By the way, even if the cellulosic material comes from corn, we still call it “cellulosic ethanol.” Corn ethanol is made solely from the sugars and starches of the corn kernel.)

The Major Advantage of Cellulosic Ethanol

Our guts are unable to digest cellulose, so we typically throw away that part of crops. A lot of it is left on the field or disposed of as agricultural waste. For corn, the cellulosic material includes the corn stover — the leaves and stalk — and the cob.

Remember what made corn ethanol such an environmental negative? A main reason is that it requires that land being used to grow food (or left as forests or grassland) be converted to growing an energy crop. And that leads to lots of global warming pollution.

This is not a problem for cellulosic ethanol — we can simply use the agricultural waste from food crops to make the ethanol and thereby avoid all those emissions.

But that will likely change. Scientists and engineers are working to make a commercially viable form of cellulosic ethanol. Some are developing new chemical processes; others are trying to genetically engineer new microbes that can “ferment” cellulose into ethanol like normal microbes that ferment sugars into ethanol. (The U.S.Department of Energy is helping fund six biorefineries.)

By my own estimates, agricultural and forest wastes could supply as much as 35 billion gallons of ethanol per year, saving up to 76 megatons of global warming emissions per year. (These results are somewhat larger than but consistent with other recent estimates (e.g., see Smith et al. 2004).) Such savings would cut a little less than 5% of all our heat-trapping pollution and about 15% of the emissions from the transportation sector.

These are significant numbers. But to reach such levels we would need to grow bioenergy crops such as switch grass. Such cultivation, in turn, would require converting lands for this purpose, and that could raise some of the problems discussed in last week’s post.

The Bottom Line of Biofuels: There Are Winners and Losers

The saying “waste not, want not” applies to biofuels. The best biofuels are made from agricultural or forests wastes or from plants cultivated on degraded or marginal lands. The product from such feedstocks — cellulosic ethanol — is where we should be directing our entrepreneurial energies.

Read more about Dr. Bill Chameides, Dean of the Nicholas School of the Environment and Earth Sciences at Duke University.