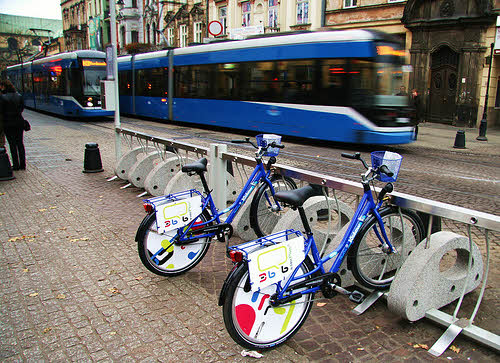 Just finished reading a fascinating post at The Atlantic Cities blog on a topic we’ve covered here before: the decline in car ownership (at least in the developed world), as well as the downward trend in miles traveled per car (aka “peak car“). Writer Derek Thompson notes “The decline in average car miles isn’t a recession trend. It’s just a trend. In the U.S., the global capitol of car enthusiasts, total miles traveled peaked in 2004, the Economist reported, and per-person travel hit a peak in 2000.”

We greenies don’t want to celebrate such news without any reservation: the US auto industry is still tied tightly to the overall health of our economy. At this point, though, we don’t have to worry too much about car makers hurting from this trend, as the developing world is picking up the slack (which is still problematic, but a topic for a different post). What does deserve our unrestrained glee is the opportunities created by such a trend: the auto industry, other manufacturers, and even other sectors can ultimately profit from this transformation while lightening the impact of personal transportation.

How so? Here are the five possibilities:

Are you part of a carpool for getting to work, or getting the kids to school? Congratulations – what was once just a standard for suburbanites has become a hot trend: the New York Times notes that European ride sharing services are growing by leaps and bounds. The opportunity here exists in putting people together to share rides (and costs) – services like Ridejoy have gotten the jump on this one for both short and long trips.

While car sharing often gets lumped in with carpooling/ride sharing, it’s actually closer to car rental… which is why players like Enterprise have joined Zipcar and non-profit I-GO in this up-and-coming market. The owners of shared cars aren’t limited to these kinds of services, though: peer-to-peer networks have sprung up as a way to make use of cars that spend most of the day parked. The idea isn’t to get consumers to buy a car, but, rather, to pay for the use of one… and there are all sorts of possibilities there.

Of course, many people are largely foregoing cars as a means of transportation, and using public transit.  That can work well in urban settings, though the bus stop and/or train station may still be a ways from your final destination. Bike sharing systems,which are popping up all over the US (New York’s green initiatives include the world’s biggest bike sharing system), give travelers an option besides walking that last mile. As with car sharing, the idea is selling access rather than the product itself. In this case, convenience is probably more of a driver than cost: no need to use clunky bus bike racks, or worry about where you’re going to lock your bike up. So far, the public-private partnership seems to be the model of choice for these services.

A bike that’s convenient to transport from street to bus/train to office (when you’re not riding it, of course) is still going to be the option of choice for many transit users, even as bike sharing spreads beyond the coastal cities that set such trends. Bicycles are still relatively cheap (and growing demand should keep them so). Folding bikes, with or without electrical assistance, are an ideal solution for the commuter who wants to take advantage of the bus or train. The opportunity here involves getting costs down – I’ll be really interested to see what kinds of materials get used in the near future for manufacturing bikes that are easy to carry.

Different forms of getting from point A to point B require different forms of information for travelers. Furthermore, the internet has opened up possibilities for information that just wasn’t available (or even thought of) a mere twenty years ago. Yes, Google Maps has dominated the route planning game with its relatively quick additions of information for biking, walking, and transit use, but it’s not the only game in town – there’s definitely room for competitors. Ridejoy’s iPhone app competes with similar offerings from Zimride and Avego. And peer-to-peer networks, regardless of the transportation mode, absolutely rely on user-friendly web and mobile applications to ensure that all runs smoothly.

No new ideas here, and we didn’t count green, sustainable franchise opportunities, just newly creative businesses – but new twists on these ideas likely will revolutionize how we get to where we’re going. If you know of innovations on these concepts, do share…