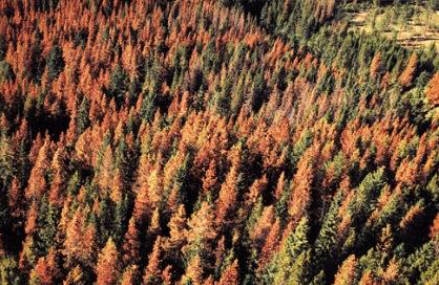 [This piece is the first of two parts addressing the pine beetle epidemic in Colorado and what the mountain communities are doing about it. While the situation may seem bleak at the outset of this story, I promise some good news in part two before all is said and done.]

Colorado has 1.7 million acres of lodgepole pine forests. Though, if you have any desire to see any of those trees alive, I’d suggest you move rather quickly. State and federal officials recently announced that the mountain pine beetle epidemic grew by a half a million acres in 2007, bringing the total infestation in the state to about 1.5 million acres. Foresters indicated that the epidemic would virtually eliminate every acre of lodgepole pines in the next three to five years.

Up until quite recently, the pine beetle epidemic in Colorado was limited to a five county area along the Continental Divide. However, recent forest surveys indicate that the beetle has crossed the Divide and is moving eastward. The Forest Service’s annual surveys that are produced by ‘stitching’ together aerial photographs have enabled the forest service to illuminate the rapid acceleration of the beetles’ northeasterly march. Once restricted to high country hamlets like Breckenridge, Fraser and Steamboat Springs, the hungry beetles are quickly moving into the foothills and front range near Denver, Boulder and Fort Collins. According to Kyle Patterson at Rocky Mountain National Park, the pine beetles have reached “epic proportions.”

Although the beetle is a full-time resident of the temperate coniferous forests of the Rocky Mountains, their numbers have grown exponentially in the last ten years, fed by a ‘perfect storm’ of contributing factors, including a steady pattern of rising temperatures.

Extreme cold temperatures can reduce beetle populations. But, ever since the most recent outbreak began in the mid-1990s, the extremes have not been extreme enough. For freezing temperatures to affect a large number of larvae during the middle of winter, temperatures of at least 30 degrees below zero must be sustained for at least five days.

Locals have come to accept that, for the most part, the beetle cannot be stopped, only adapted to. The good news is that folks in the mountain towns of Colorado are not willing to simply let the beetles win. Facing daily changes to their familiar green landscapes, and dealing with the potential of catastrophic wildfire, large-scale erosion leading to watershed quality problems, and loss of tourism dollars, communities in Colorado are forming innovative, multilevel collaborative partnerships to come up with new ideas and plans of action for an epidemic that knows no political boundaries.

The biggest obstacle for community organizations is not political will, it is the significant resources required for the large-scale thinning of at-risk areas. Currently, the average price of thinning one acre of forests in Summit County, CO is about $2000. Limited funding obviously means that not every acre can be treated. The reason for the high cost of forest thinning is that there is no market for the beetle-kill wood. According to Gary Severson of the Northwest Colorado Council of Governments:

“There’s simply not enough public money to thin the forests. The only way to do this is to find some way to add value to this material. With small-diameter lodgepole pine, there aren’t a lot of options.”

But, at least there are some options, and some pretty good ones at that. I will address some of the very innovative solutions to this sticky problem in part two.