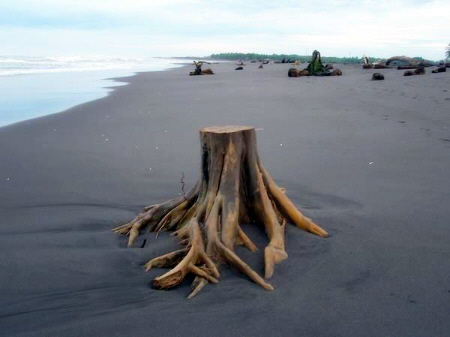 The world’s forests, which cover a third of Earth’s land area, provide us with many essential services. They absorb carbon dioxide from the atmosphere and give us oxygen, limit soil erosion, aid in flood control and aquifer recharge, and host a wealth of biodiversity. But as human populations have grown, so, too, have the demands placed on these natural systems. As vast swaths of forests have been cleared for agriculture and development, the use of forest products has also climbed, further increasing pressures on the world’s trees.

The Major Causes of Deforestation

In 2008, some 3.4 billion cubic meters of wood were removed from the world’s forests, enough to cover Manhattan nearly 60 meters (200 feet) deep in lumber. Over half of this wood is used directly as fuel for heating and cooking, while the remaining portion is used for industrial purposes, such as construction lumber or paper production.

Fuelwood dominates wood use in developing regions. Across Asia, 76 percent of wood cut down is used as fuel. In Africa, fuelwood accounts for 90 percent of wood removals.

Although demand for fuelwood is rising, inexpensive alternative technologies can reverse this trend. In Kenya, for example, two internationally-sponsored projects have distributed thousands of highly efficient cookstoves and solar-powered cookers, which greatly reduce or even eliminate the wood used by a traditional stove. The new stoves can be used for cooking and water purification, and they emit far less pollution, improving local air quality and health.

For industrial wood, where demand around the world is driven by industrial countries, lightening the load depends on wiser use of forest products. There is an enormous possibility for reducing wood use just by replacing disposable facial tissues, paper napkins, and shopping bags with reusable cloth alternatives.

After cutting demand for throwaway products, we can turn to recycling. Recycling rates vary widely among the top 10 paper-producing countries. South Korea tops the list, recycling an impressive 85 percent of its paper. The United States, the number one paper consumer, has increased its share of paper recycled from roughly one fifth in 1980 to close to half today. China recycles only 35 percent. If every country in the world recycled as much of its paper as South Korea does, the amount of wood used to produce paper worldwide would decrease by a third.

In addition to initiatives to reduce deforestation, widespread tree planting efforts are also needed to restore forests. Here, South Korea again provides a model: beginning in the 1960s, the government initiated a reforestation campaign to cover its largely deforested mountainsides. Today forests blanket 65 percent of the country. In Niger, tree planting by farmers has succeeded in reducing soil erosion and revitalizing communities in an area previously suffering from severe drought and desertification. The United Nations Environment Programme’s Billion Tree Campaign provides another inspiring example: since its launch in 2006, participating governments and individuals around the world have planted over 10 billion trees.

As these initiatives show, protecting and restoring the earth’s forests is within reach. Achieving this goal also depends on stabilizing human numbers and stabilizing climate, all part of the Plan B mobilization to save civilization.

For more information on the Plan B earth restoration goals:

Want to wage your own battle against deforestation? Check out our wide selection of recycled paper products, including office paper, paper towels, and mailing materials. Keep in mind that permanent replacements, like cleaning rags, are always the greenest choice.