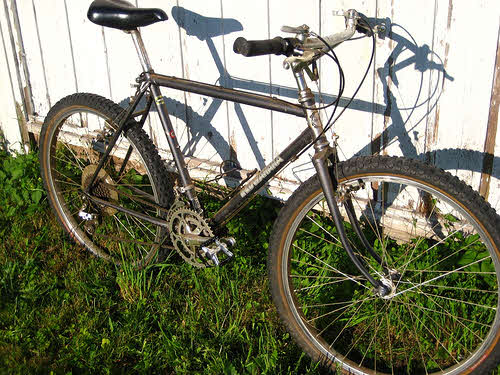 Bicycle commuting is on the rise in many American cities. Both Chicago and Long Beach, California have declared that they will become the most bike-friendly communities in the country. New York City is in the process of building a bike-share network designed specifically for bike commuters. Everyone’s getting excited. And why shouldn’t they? After all, biking to work has so many benefits. Cyclists save money on gas and get to enjoy the outdoors every day. They burn calories, decrease traffic congestion and lower air pollution levels. Cycling also helps build a sense of community. Instead of sitting in cars for an hour each morning, bike commuters can see and talk with one another.

The first step to any successful bike commuting plan is the bike itself. Below are a few tips that could help you turn your old cruiser in the garage into an efficient commuting bicycle.

In most cases, there’s no need to go out and buy a new bike specifically for commuting. First and foremost, new bikes are expensive. Secondly, new bikes quickly become old bikes. Rather it’s probably more worth your time to invest in bike maintenance. Bikes, like cars and relationships, require regular care.

You should lubricate your bike chain every month or so. Perhaps the easiest way to do this is with a lubricant spray can. Turn the bike upside down so that the wheels are sticking into the air and the handle bars are on the ground. Turn the pedal with your hand and apply the lubricant to the chain as it slides by. You might also spray lubricant on the wires connecting the handbrakes to the tires. This prevents these wires from rusting and becoming ineffective. One of the scariest feelings for any cyclist is to squeeze a handbrake only to have nothing happen.

In addition to lubrication, you should also take your bike in for a tune-up every six months. If you’re riding on a consistent basis it’s inevitable that parts will come loose and slide out of place. Getting a regular tune-up will ensure that you’re operating a safe and efficient vehicle.

Attaching some sort of basket to your bike is crucial for any commuter. Backpacks are fine for some cyclists. But when you’re trying to carry dress clothes, shoes or other bulky objects (such as a briefcase), a backpack may not be room enough. That’s where a basket comes in handy. Baskets come in two basic varieties. The first type is the classic bicycle basket attached to the handlebars. A good front basket will also be supported by rods that attach to the front wheel axel. Front baskets are easy to put on and typically only require a screwdriver and maybe an Allen wrench. Don’t have an Allen wrench? Ask a neighbor. Make friends. Be social. That’s part of what biking is all about.

The other type of bicycle basket rests over the back wheel behind the seat. It sits on an attachment called a rear bike rack. This rack is typically just a flat platform which stands on the back axle. There are a number of bike racks for sale along with various carrying cases which hook onto them. If you’re looking to go cheap, however, you can skip the carrying cases and just bungee or bolt a plastic milk crate onto the rack.

Particularly in the winter months when the day ends early, having a light on your bicycle can be a necessity. Without a light, bicyclists are invisible to cars and each other. Lights can be purchased at a bike store for as little as $10 and should be attached to the front handle bars to act like a car headlamp. In addition, every bicyclist should have a back reflector and a front reflector. Some bikes already come with reflectors included, but just in case, all bicycle shops carry them as well.

Mirrors can be a useful tool for cyclists who deal with lots of car traffic. Shops carry mirrors that attach to the handle bars and act just like side mirrors on cars. Instead of worrying if a vehicle is behind you, a cyclist with a mirror can just glance to the side and get a full view of the roadway.

For cyclists heading through dense pedestrian traffic, a bell can be a great device for clearing a suitable bike path. On hike and bike trails, it’s always a good idea to alert pedestrians to your presence with some sort of noise. Some bikers choose to call out “On your left!” or “Excuse me!” The bike bell has the added advantage, however, of not wearing out your lungs. While a dinging bike bell may be a nuisance, it’s better than a shouting to and from the office.

Restoring an effective commuting bike is the first step towards turning your rush hour commute into a healthy, eco-friendly activity. Besides, life is too short to spend it sitting in traffic.

Brian writes for the W.T. Johnson Law Firm in Dallas, Texas. The Dallas lawyers at W.T. Johnson handle personal injury cases involving bicyclists and pedestrians and are committed to promoting eco-friendly traffic in the DFW area and across the country.