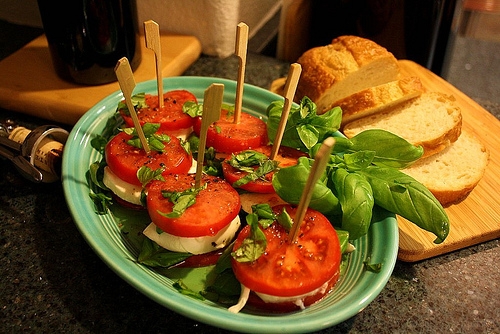 Strawberries in February, peaches in March, tomatoes in April… Can you guess where I am? Certainly not in a garden in North America. But the supermarket would have you think otherwise — that fruits and vegetables can be had at any time of the year. It simply isn’t the case. Most fruits and vegetables have a short season in which they can actually be harvested. But how do we know what foods are actually in season? Thankfully, there’s help.

A Guide to Seasonal Eating

This handy-dandy food chart lists fruits and vegetables according to when they are actually in season and available. Did you know that watermelons and apricots are only available for two months out of the whole year, for example? On the other hand, some vegetables keep quite well and can be eaten for a large part of the year. Check it out:

For the full size version of this image, check out Frugal for Life.

It’s a bit of a simplistic chart, but it gives you the general idea of when most foods are actually in season. (It’s a bit misleading because garlic, for example, is usually planted and harvested once during specific times the year but can be kept fresh for months at a time in the right conditions. But perhaps that is beyond the scope of this chart…)

Nevertheless, it’s very empowering to actually know when food is in season and can be obtained fresh. Eating fresh foods that are in season is, after all, the way humans have survived for 99% of history — before the advent of shipping produce all over the globe so that we can have our salad with tomatoes in the middle of winter.

Use this guide the next time you go to the supermarket to better determine what’s in season!

Need help on figuring out to do with that seasonal produce? Check out our selection of cookbooks for raw, vegan, and straight-from-the-garden (or farmers’ market) recipes.