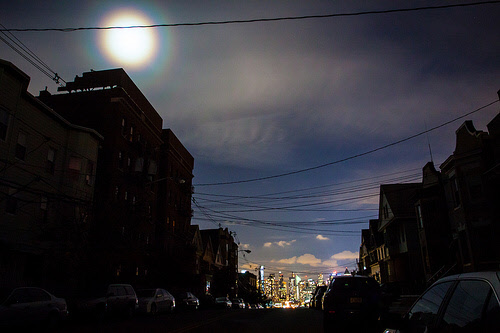 Few natural disasters will be remembered as long as Hurricane Sandy, which struck the New York and New Jersey coastline on October 29, 2012 and quickly ravaged much of the northeastern United States. The massive storm caused in excess of $20 billion in damage along the East Coast, killed over 100 people, and left thousands homeless. It also cut off electricity to 8.5 million Americans. As of November 13, 2012 over 15,000 New York City residents were still waiting for their power to be restored.

Natural disasters like these raise questions about the reliability of the US power grid, and whether alternative energy sources like solar could make a difference. Solar power offers three reasons for optimism for greater electric reliability: The decentralized distribution of solar power, affordability, and the ability to draw on solar power even when the sun doesn’t shine and the grid is down.

Anyone who has ever used a calculator powered by photovoltaic cells knows about this benefit of solar energy. It can be used at any spot on earth lit by the sun’s rays. Contrast this with traditional methods of generating electricity. They rely on power that’s created at a centralized facility, such as a hydroelectric dam, coal-fired plant, or nuclear reactor. It must then be funneled through hundreds of miles of high voltage wires to millions of individual homes and businesses. This makes the entire system vulnerable to storm damage from falling trees, high winds, and even flooding.

Because they’re less dependent on a centralized grid, many large urban areas are installing solar panels on both public and private buildings. For example, Los Angeles has started an initiative to locate panels across 12,000 acres of rooftop property throughout the urban area. It’s expected that approximately 1/3 of the city’s electrical usage will be met by solar and other renewable sources by 2020. Because this power will be created at thousands of points across L.A., it will be largely impervious to the vulnerabilities associated with centralized power systems. Had such a system been in place in New York prior to Hurricane Sandy, hundreds of thousands of people may have avoided several weeks without power, light and heat during the cold days of November.

Solar has the advantage of versatility. While other renewable energy sources show promise, there are still unique challenges with the transition. Building a transmission infrastructure for wind energy, for example, will require significant investment. Nonetheless, these technologies should be considered as part of an overall energy strategy that reduces our dependence on traditional fuels, improves sustainability, and increases reliability.

All power creation methods carry costs, both financial and environmental. Coal costs money to mine, transport, and burn. It also entails severe environmental penalties. Hydroelectric dams flood lands that could be used for agricultural purposes. Nuclear reactors use fuels that are expensive to produce and dispose of. They require elaborate security systems to guard against terrorist attacks, and the possibility of a meltdown is always present.

Solar power costs, by comparison, are primarily limited to hardware. After the initial costs of the equipment and some modest maintenance costs, solar energy is very inexpensive to collect and use. Most solar systems have no moving parts to wear out, unlike the turbines used in hydroelectric, coal, and nuclear plants. This cost differential makes setting up photovoltaic panel/battery farms relatively inexpensive. And, because the energy can be routed directly into the existing grid, there’s no need to build additional transmission lines.

Most importantly, solar panels are affordable to homeowners and begin paying for themselves right away in the form of lower energy bills. In New York and New Jersey, where Hurricane Sandy had the biggest impact, residential solar panels would give homeowners an affordable, reliable complement to utility electric. Many home PV systems yield a positive return on investment in less than 10 years.

Solar as an Emergency Power Source

In the immediate aftermath of Superstorm Sandy, small solar generators – some of which are lighter and more portable than gas or diesel generators – let police, medics, firefighters and other first responders power cell phones, two-way radios, and other communications equipment. Many residents were also saved by solar chargers.

Even larger-scale PV arrays on homes and businesses can provide emergency back-up power. Critics of solar power often argue that solar panels can only generate electricity when the sun is shining. Yet the integration of battery-based storage makes solar an increasingly viable option when so-called “reliable” grid-based utilities go down. Energy storage solutions are becoming ever-more powerful and affordable.

Looking at all the benefits that solar energy provides, it becomes clear that it could have made things easier for the victims of Hurricane Sandy. While not furnishing all of their needs, it could certainly have powered essential devices, such as lights, for an extended period. Because of this, municipalities of all sizes should make photovoltaic panels part of their strategy for creating electricity. The potential benefits are simply too great to ignore.