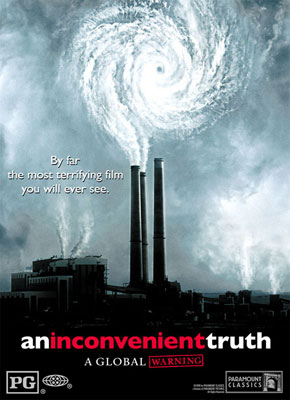 As I mentioned briefly in a comment this morning, Jan and I did go see An Inconvenient Truth yesterday. I want to agree with people like ianqui who said “Go see it even if you know quite a bit about global warming.” First, Gore’s presentation (and, yes, most of the film is him delivering his famed PowerPoint presentation) does a wonderful job of creating a visual representation of the impact of contemporary global warming: on certain graphs, you can see (as so many deniers have told us) that, yes, the Earth has gone through cycles of warming and cooling — but what we’re seeing now is nothing like those cycles. Secondly, Gore himself presents this information with deep knowledge and passion. This is not the “policy wonk” from the 2000 campaign, but rather a man on a mission who’s studied the issue thoroughly, and has considered not just the science that shows global warming is a reality, but also the political, economic and cultural implications that global temperature change will likely bring about in coming years. Finally, it’s a story: Gore’s story of first being introduced to this concept at Vanderbilt in the sixties by one of the first scientists to identify the phenomenon, and how it shaped his view of the world and, to some degree, his political career. As at least one other reviewer has said (I can’t remember who), there likely are a few too many shots of Gore looking thoughtful and pensive, but that’s a really minor weakness in a powerful film that makes the science of climate change accessible to a broad audience. Gore himself has never looked better — I got the sense that he’s found his calling, and he’s really good at it!

Go see this film. Take someone else with you. Offer to buy tickets for the naysayers you know. What makes this film really powerful is its presentation of global warming in a framework that we can all comprehend, and use to discuss these rather complex ideas. If you want more explanation of the science, including a couple of minor errors in it, go read RealClimate’s response. But perhaps the most important messages we can take from this film are 1) climate change is no longer a political issue; it’s a moral one; and 2) “Political will is a renewable resource.” We’ve seen that state and local governments are working to address this issue. We can make this happen at the federal level. Maybe not until Dubya’s out of office (which, of course, shortens our time to deal with the issue), but we can make sure that our next President, whomever s/he is, has to go on the record with a detailed, legitimate plan to address this “inconvenient truth.”