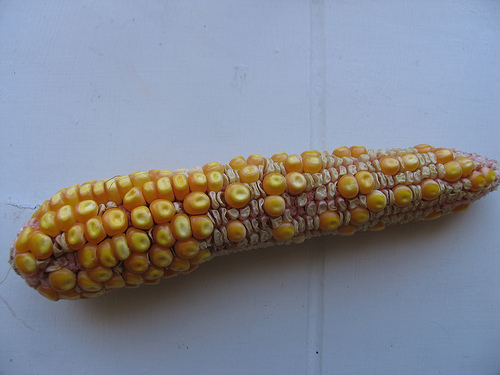 OK, I’m going to go out on a limb and say that I think that this year’s climate extremes are linked to human-caused climate change.  We might not really have the definitive answer on whether that is true for 20 years, but I would like nothing better than to be proven wrong about the linkage I’m making today.  From a global food supply perspective, the effects of weather on 2012 food production is problematic no matter what its cause.  As bad as it seems, it might just be a “shot over the bow” relative to what me might expect in the future. The unfilled corn cob pictured above is a relatively decent example of what the US corn crop is yielding this year.

How Hot Is It?

This isn’t just about low rainfall.  There is a recent graph about temperature extremes on the NOAA (National Oceanic and Atmospheric Agency) site that is striking. The 2012 difference from average is off the chart! 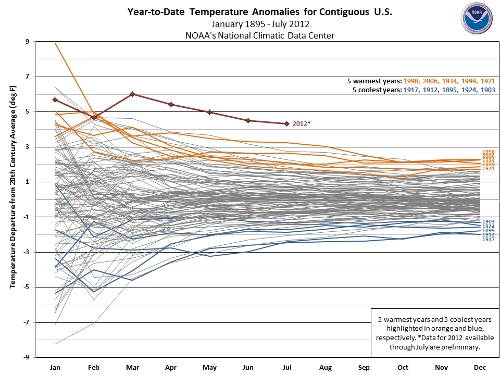 When it is both hot and dry, our dominant, rain-fed crops suffer the most.

It Isn’t Just A US Drought

Yes, we have a massive drought in the US unlike anything we have seen for decades.  But there are also drought issues with wheat in Russia and excessive rain issues with crops in Western Europe that could ruin some of their harvest with mycotoxin contamination.  Ironically, the last season in Australia was better than many for their wheat crop which means that there is less low quality wheat going into the feed market that has been important for Chinese and other Asian meat production in recent years.

What ever this year’s weather represents in a climate change context, it has been problematic for the global food supply.  The FAO (UN Food and Agricultural Organization) tracks the prices for various foods in international trade and generates a “Food Price Index” each month.  I’ve been blogging about this for a couple of years, but the new data released on August 9th is disturbing – particularly the data for cereals (wheat, rice, corn, soybeans,etc).  See the graph below 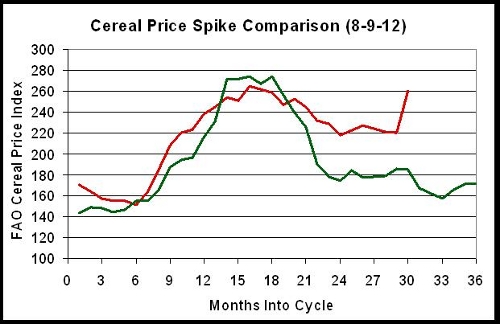 The red line is for the period 2010-12 and in the 30th month of that cycle we are seeing a 17% increase in one month – a steeper climb that was even seen in the 2007-9 price spike (green line).  This rise was seen even before the full magnitude of the US drought was known.  I shudder to think what the index will show next month.  The 2007/8 spike has been linked to a great deal of political insecurity and even credited as a driver of the “Arab Spring.”  Hold on to your hats to see what this new price spike will mean.

Of course the impact of these high food trading prices depends on how dependent a country is on imports and how much of family income is spent on food.  There is an excellent new site from The Economist which compares countries around the world in terms of their food security and food spend.

I’ll say it again.  This certainly looks like the sort of climate extreme and related food supply impacts that we would expect from climate change.  I both hope to be around in 20 years and to be proven wrong about my belief that “this is our global food supply on climate change.”

You are welcome to comment here and/or to email me a sdsavage@sprynet.com