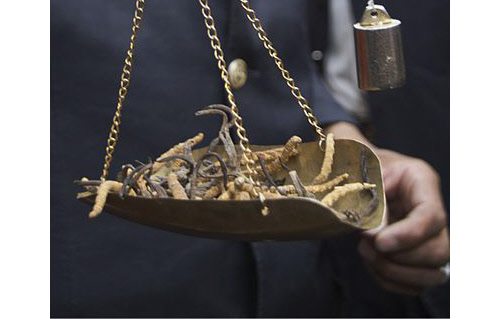 Editor’s note: Think erectile dysfunction treatments only lead to the creation of really cheesy television commercials? Well, they do, but, in the case of this natural remedy, we’re also seeing environmental damage in Nepal…

In the fight against erectile dysfunction, a number of synthetic treatments have been developed throughout the world. In addition to these scientific developments, a number of natural treatments exist that are easily as effective at treating this common problem. One such natural remedy is the so-called “Himalayan Viagra.” Known in Tibetan as “yartsa gunbu“, this treatment is actually produced when a fungus infects caterpillars that live underground in the hills of Nepal. Once the caterpillars have essentially been killed by the fungus, they rise above the soil and is able to be collected by harvesters. And, indeed, much harvesting of yartsa gunbu is taking place in Nepal — so much that it’s becoming cause for concern.

In a world that is constantly promoting new drugs to treat erectile dysfunction in men, the yartsa gunbu crop in Nepal has increased tremendously in value. In fact, 500 grams of the substance can sell for as much as $36,000 in some countries throughout Asia. That’s a significant profit for most people, especially since they pay a relatively low fee to enter the hills where the substance can be found. It’s especially notable given the average income levels in Nepal and its surrounding countries, which is far less than $36,000 per yet — yet alone per 500 grams of yartsa gunbu.

As its value increases, however, environmental officials in Nepal are noticing that there is a veritable “gold rush” for the substance among the country’s citizens. That might seem like a good thing and, in terms of profit, it certainly is in many cases. As far as the environment is concerned, however, there are some serious consequences to consider.

The hills where yartsa gunbu can be found in Tibet are typically lush, grassy hills, that are as scenic as they are rich in the substance. It is this grass that actually helps the fungus grow, spread, and produce the spores that lead to yartsu gunbu. However, in the quest to find the substance and sell it for profit, people have to tear up that grass in their search for the mummified caterpillars containing it. This has taken a significant toll on the hills of Nepal.

According to many environmental experts in the country, the rate at which grass is being torn up and killed in the quest for yartsa gunbu could turn many of the country’s hills into virtual deserts by this time next year. In addition to significantly damaging the environment, this would result in far less yartsa gunbu — if any — and would take years to recover from. That, in turn, would significant damage the economy that has developed to meet the rising demand for the substance.

An Attempt to Control the Rush to the Hills

In an effort to stave off the transition of these hills from grassy to desert, a local committee has been developed to control the quest for yartsa gunbu. They’ve done this by levying fees on those who seek to locate and sell the substance. Locals have to pay $1,000 rupees, or roughly $11; non-locals face a much higher entrance fee of $3,000 rupees, or $33. The committee’s goals are noble, but the result of its entrance fees aren’t exactly in line with its own expectations.

Instead, the charging of a nominal fee to look for yartsa gunbu has made the substance seem all the more valuable. This perception of further increased value has only increased interest and demand among locals and outsiders alike, and the effect of implementing this fee structure has been negligible at best. Environmental officials in the country are worried that their efforts won’t be enough to stave off major environmental damage.

Despite the Rush, an Essential Part of the Economy

Officials want to preserve both the local economy and the high quality of the natural environment that produces yartsa gunbu in the first place. Both things are noble pursuits. The so-called “gold rush” for the substance has been greatly beneficial to many of the poorer communities in Nepal, and the committee wishes to promote both the serene natural features of the country and the improvement of economic conditions for its most underprivileged citizens. If it can manage to do that, “Himalayan Viagra” might just be a road to real progress and change in the country.