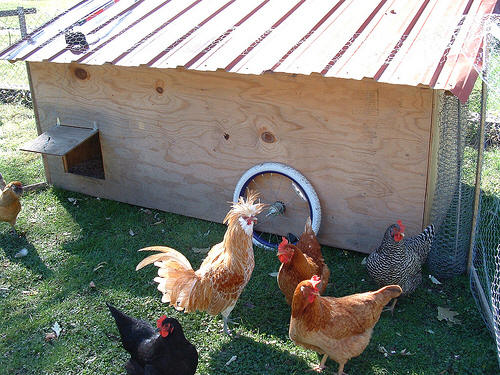 The front line in the war against bondage to corporate agribusiness in the United States has historically been on small family farms. As competition has grown from larger, more efficient operations wielding weapons like government subsidies, buying-power, monoculture and synthetic inputs – small family farms have fallen victim to “The Big Ag”.

But the war is not lost. A perfect storm has been brewing for several years as the ominous clouds of a Great Recession converge with an avalanche of food recalls, and several diet-related healthcare epidemics. Urban food renegades, dieticians, eco-warriors, frugality gurus, journalists, philosophers and everyday Americans have begun to fight back. For the first time in decades they stand side-by-side with rural farmers and self-proclaimed Christian-conservative-libertarian-environmentalist-lunatics – ready to fight for their right to affordable, safe, nutritious food; and the right to grow it in their own backyards.

The thing about laws, ordinances, animal control codes and HOA rules is that they are generated much faster than they decompose. We bind ourselves with more rules every day, but only seldom remove an archaic law from the books. Like a mess of fishing line around their feet, urban farmers have to patiently untangle their way out of the many federal, state, city and neighborhood regulations that keep them from exercising their right to feed themselves.

I live in Denver. We can have chickens here, but must jump through some fairly asinine bureaucratic hoops and pay fees so high they make the whole exercise counterproductive. First you submit an application to Animal Control, which costs $50. Then they come out to inspect the site, never having actually provided any guidance on what standards you’re supposed to meet. If these people approve you (never mind the fact that they’re trained to deal with dogs and cats and most don’t even seem to realize a chicken doesn’t need a rooster to lay eggs) then you’re on to the zoning department. You will be required to contact the neighborhood organization and council member for your area, and post two notices at two different times in your front yard, informing any neighbors (not just next door, but from blocks away) of their right to object. Why they can object to you having a Nigerian Dwarf goat while you can have nothing to say about their five great danes has yet to be answered – but, providing they don’t object after 30 days, you can now purchase a permit for $100. This permit costs $70 for renewal every year. Keep in mind this is only for the chickens you had at the time. Should one of your hens die (and they only lay well for 2-3 years) you’re supposed to pay again for their replacements.

Drive down the road a bit to the city of Colorado Springs and things are quite different. You can have up to ten chickens, ducks, quail… without having to notify anyone, apply for anything, or pay any fees.

And so the story goes in cities and neighborhoods across the country. Archaic, arbitrary, asinine regulations have been put in place by people who must think eggs come from a machine and milk is made in a laboratory. Speaking of milk, although people have sometimes used community supported agriculture (CSA) loopholes to get around it, none of us are allowed to buy milk from our neighbor without it being pasteurized at a federally inspected agency. Even if I sign a contract stating that I am fully aware of the risk of drinking unpasteurized milk, my neighbor still cannot sell it to me. Daddy-Government, in his paternalistic wisdom, thinks I am too stupid to make up my own mind about this. Meanwhile, we’re seeing a deluge of E Coli and salmonella recalls from the industrial food chain every month.

For decades we have legislated ourselves away from our food. We have allowed our small farms to be crushed by the weight of corporate agribusiness, unfair Farm Bills, and the rising costs of owning land. Yet it makes me smile to know that we “city-folk” are finally coming to our senses. We are starting to see how the laws created in Washington, our state capitals, our city councils and our neighborhood organizations are stripping away our natural birthright to grow and eat our own food. Small farmers have known this all along. And I think we are finally starting to hear their battle cry.

Would You Like to Join The Fight?
Here are some things you can do to get back or maintain your right to healthy, natural food from small farms and backyard gardens:

Everett Sizemore started the Denver Urban Homesteading Group in early 2009. He and his wife Missy make how-to videos about simple living skills and have recently purchased 15-acres in southwest Virginia where they hope to start a homestead-style farmstay in 2011.