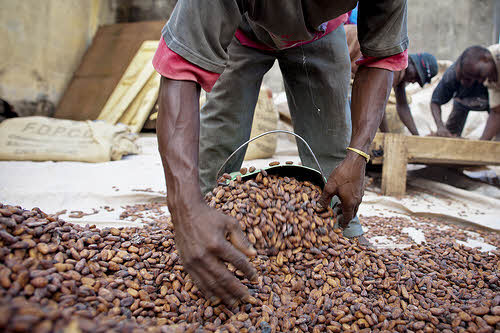 The International Labor Rights Forum (ILRF) announced on Thursday that Whole Foods Market stores around the country will drop Scharffen Berger chocolates, one of the Hershey Company’s artisan chocolate brands. Whole Foods plans to remove the chocolates from its shelves by the end of the year.

The decision by Whole Foods came after pressure from over 40 natural food retailers and cooperatives concerned that children are being employed in Hershey’s supply chain.

“We do not take the concern over child labor or slave labor lightly, and we are currently in ongoing conversations with Hershey’s about its existing social accountability programs,” stated Whole Foods in a letter to Raise the Bar, Hershey!, a campaign that lobbies Hershey to improve its labor practices. “Whole Foods Market is removing Scharffen Berger chocolate from our shelves pending receiving further information from Hershey’s.”

The announcement came just one day after Hershey publically committed to sourcing 100 percent certified cocoa by 2020 while accelerating its programs to eliminate child labor in the cocoa regions of West Africa. “Certified cocoa will be verified through independent auditors to assure that it is grown in line with the highest internationally recognized standards for labor, environmental and better farming practices,” stated the company in a release.

Hershey also said yesterday that Scharffen Berger will source 100 percent certified cocoa by the end of 2013.

Raise the Bar, Hershey! welcomed Hershey’s commitment, although the campaign noted that “not all certifications are equal, especially when it comes to addressing the worst forms of child labor in the West African cocoa sector.” The campaign urged Hershey to seek Fair Trade certification for its cocoa products.

Hershey is also a signatory of the U.S. Department of Labor’s (DOL) Framework of Action to eliminate child labor in the cocoa industry in Ghana and Côte d’Ivoire. Other major players in the chocolate industry, including Barry Callebaut, Ferrero, Mars, and Nestlé, have also signed the Framework of Action.

In total, signatories have pledged $7 million to the Framework of Action, which works to help Ghana and Côte d’Ivoire develop community-based monitoring systems to reveal and resolve the “worst forms” of child labor.

Hershey has partnered with the United Nations International Labor Organization, the World Cocoa Foundation, and the United States Agency for International Development to eliminate child labor in West Africa. Hershey also built CocoaLink, the first mobile phone network for cocoa farmers in West Africa. The program is currently operating in Ghana with plans to launch in Côte d’Ivoire in 2013.

Despite these efforts, international labor groups say that Hershey has failed to adequately address child labor in its supply chain. A DOL-funded study conducted by Tulane University estimated that over 1.8 million children in Ghana and Côte d’Ivoire are employed in cocoa-related agriculture. The study also estimated that only between 5 and 10 percent of these children work for pay.

Many major chocolate companies, including Hershey, source the majority of their cocoa from West Africa.

Despite the removal of Sharffen Berger products, labor groups insist that Whole Foods has not gone far enough. Whole Foods has also been urged to remove Dagoba products, another of Hershey’s artisan brands, even though 100 percent of Dagoba organic chocolate is Rainforest Alliance certified.