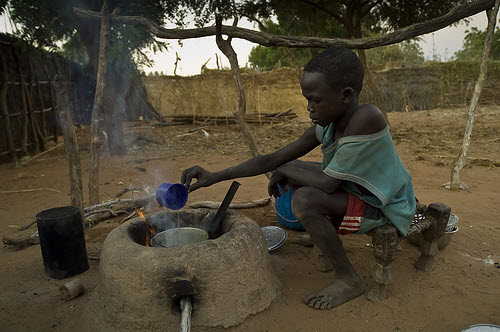 Today is World Food Day. It offers the opportunity to strengthen national and international solidarity in the fight to end hunger, malnutrition, and poverty. With falling water tables, eroding soils, and rising temperatures making it difficult to feed growing populations, control of arable land and water resources is moving to center stage in the global struggle for food security. Here are some facts to consider:

1. There will be 219,000 people at the dinner table tonight who were not there last night—many of them with empty plates.
Ensuring adequate food supplies was once a rather simple matter, the sole responsibility of the ministry of agriculture. When governments wanted to accelerate growth in the grain harvest, they simply raised the support price paid to farmers. Now that is changing. Securing future food supplies has become incredibly complex. It may now depend more on policies in the ministry of health and family planning or of energy than in the ministry of agriculture itself.

2. Today, with incomes rising fast in emerging economies, there are at least 3 billion people moving up the food chain, consuming more grain-intensive livestock and poultry products.
Today, the growth in world grain consumption is concentrated in China. It is adding over 8 million people per year, but the big driver is the rising affluence of its nearly 1.4 billion people. As incomes go up, people tend to eat more meat. China’s meat consumption per person is still only half that of the United States, leaving a huge potential for future demand growth.

3. In India some 190 million people are being fed with grain produced by overpumping groundwater. For China, there are 130 million in the same boat.
Aquifer depletion now threatens harvests in the big three grain producers—China, India, and the United States—that together produce half of the world’s grain. The question is not whether water shortages will affect future harvests in these countries, but rather when they will do so.

4. In Nigeria, 27 percent of families experience foodless days. In India it is 24 percent, in Peru 14 percent.
The world is in transition from an era dominated by surpluses to one defined by scarcity. Not eating at all on some days is how the world’s poorest are coping with the doubling of world grain prices since 2006. But even as we face new constraints on future production, the world population is growing by 80 million people each year.

5. Water supply is now the principal constraint on efforts to expand world food production.
During the last half of the twentieth century, the world’s irrigated area expanded from some 250 million acres in 1950 to roughly 700 million in 2000. This near tripling of world irrigation within 50 years was historically unique. Since then the growth in irrigation has come to a near standstill, expanding only 10 percent between 2000 and 2010.

8. At no time since agriculture began has the world faced such a predictably massive threat to food production as that posed by the melting mountain glaciers of Asia.
Mountain glaciers are melting in the Andes, the Rocky Mountains, the Alps, and elsewhere, but nowhere does melting threaten world food security more than in the glaciers of the Himalayas and on the Tibetan Plateau that feed the major rivers of India and China. Ice melt helps sustain these rivers during the dry season. In the Indus, Ganges, Yellow, and Yangtze river basins, where irrigated agriculture depends heavily on rivers, the loss of glacial-fed, dry-season flow will shrink harvests and could create potentially unmanageable food shortages.

9. After several decades of raising grain yields, farmers in the more agriculturally advanced countries have recently hit a glass ceiling, one imposed by the limits of photosynthesis itself.
In Japan, the longtime leader in raising cropland productivity, the rise in the yield of rice that began in the 1880s essentially came to a halt in 1996. Having maximized productivity, farmers ran into the inherent limits of photosynthesis and could no longer increase the amount they could harvest from a given plot. In China, rice yields are now just 4 percent below Japan’s. Unless China can raise its yields above those in Japan, which seems unlikely, it, too, is facing a plateauing of rice yields. Yields of wheat, the world’s other food staple, are also plateauing in the more agriculturally advanced countries. For example, France, Germany, and the United Kingdom —Europe’s leading wheat producers—had been raising wheat yields for several decades, but roughly a decade ago, all three hit plateaus. Corn yields in the United States, which accounts for nearly 40 percent of the world corn harvest, are starting to level off. Yields in some other corn-growing countries such as Argentina, France, and Italy also appear to be stagnating.

10. To state the obvious, we are in a situation both difficult and dangerous.
The world today desperately needs leadership on the food security issue to help the world understand both the enormity of the challenge we face and the extraordinary scope of a response, one that, among other things, requires a total restructuring of the energy economy. The scale of this economic restructuring is matched only by the urgency of doing so. Political leaders talk about cutting carbon emissions 80 percent by 2050, but if we stay on the current trajectory the game will be over long before then. If we want to stabilize climate, we need to cut carbon emissions far more rapidly. President Obama needs to understand both the gravity and urgency of the tightening food situation and the consequences of leaving it unattended. We are not looking at 2030 or 2050. We are looking at an abrupt disruption in the world food supply that could be just one poor harvest away.