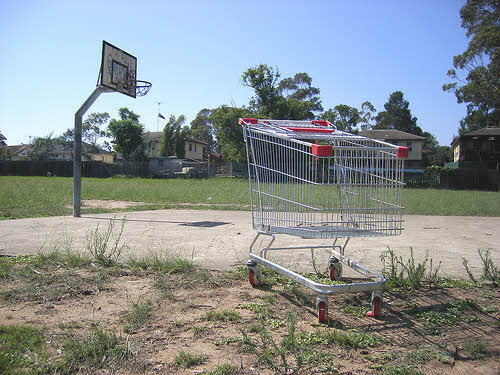 Last week, I took a look at the biocellar, a concept for turning abandoned urban homes into greenhouses that serve the surrounding community. One of the beauties of this idea: the “urban” part of this definition isn’t necessary – any structure with a basement could work. I poked around a bit looking for other ideas similar to this, and came upon Evan Hauptmann’s Foreclosure Farm concept, which involves taking abandoned suburban and exurban housing developments, and turning them into farms/growing spaces.

As with the biocellar (which Hauptmann lists as one of his inspirations), the idea here is leverage embodied energy rather than “reinventing the wheel” (and burning more energy to do it). Empty lots in planned developments likely do have ready access to utilities, and abandoned buildings within a development could become sources of usable materials, or converted to serve agricultural purposes – if not greenhouses, then processing plants, markets, etc.

This one blog post was all I found on the concept, so I don’t know whether Hauptmann or anyone else has moved forward with it: the post shows a lot of concepting that could be picked up pretty easily. As he notes in the post, ownership of the land in question would probably be the biggest hurdle to getting this going.

Empty McMansion developments represent the failure of one model of development; that doesn’t mean they’re useless, though. No reason such spaces couldn’t be the site of full-scale ecovillages. Got other idea for putting abandoned “bedroom community” development to more sustainable use? Share it with us.