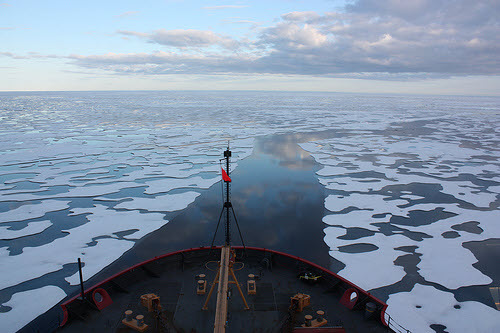 The amount of Arctic sea ice has plummeted in recent decades—a bold manifestation of the rise in temperature resulting from the rapid increase in carbon dioxide (CO2) in the atmosphere. After staying below 300 parts per million (ppm) for some 800,000 years, the concentration of CO2 in the atmosphere skyrocketed as humans started burning more and more fossil fuels. In 2013, atmospheric CO2 averaged 396 ppm. Carbon dioxide traps heat, reducing the amount escaping into space, thereby warming the globe. Together with other heat-trapping gases, the additional CO2 has so far raised the Earth’s temperature by 1.4 degrees Fahrenheit (0.8 degrees Celsius) since the late 19th century. The extra heat is melting snow and ice around the world, including Arctic sea ice, changing the face of the planet as we know it. For some 1,500 years the late summertime size of the North Pole’s ice cap fluctuated narrowly around 10 million square kilometers; in recent summers, ice covered half that area. The ice pack is expected to keep shrinking as temperatures continue to rise.

For more information on the changing climate and how to stabilize it, see World on the Edge, by Lester R. Brown at www.earth-policy.org.