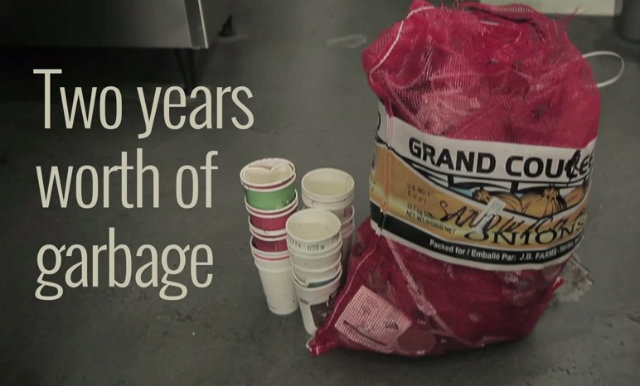 I know I’ve said this about other industries, but it is really hard to imagine a zero-waste restaurant. From food trimmings and packaging coming out of the kitchen to the paper napkins, cups, tray liners, etc., that one finds in the front of quick service establishments, a trash can – and a dumpster – seem absolutely critical to running this kind of business. Not for Chicago restaurant Sandwich Me In, though: from the very beginning, owner and chef Justin Vrany has made zero waste the standard… and, in 2 1/2 years of operation, he’s succeeded on that front.

As you’ll see in the video below, Justin’s made waste-free a hallmark of his own life, and incorporated it into his business from the beginning. According to Organic Connections, this mindset even went into the renovation of the space that became Sandwich Me In: “Normally, a renovation of a space this size will create two dumpster loads,’ Vrany explains. ‘We only used an eighth of a dumpster.’ Vrany bought all used equipment, and then proceeded to build his counters from the skids the equipment came loaded on.” He does note that the economics of that last choice don’t add up, but, of course, it’s those kinds of details that likely motivate many customers to keep coming back.

Find out more about Vrany’s efforts to reuse, recycle, compost, or otherwise make use of every bit of “waste” produced by his business:

Of course, the food’s the thing: no amount of sustainable business practice will make up for mediocre fare or lackadaisical service. The offerings shown in the video and on the restaurant’s website look amazing: if you’ve eaten at Sandwich Me In, give us the scoop.

Know of other restaurants, whatever the service level, that have made zero waste a part of doing business? Let us know about them…