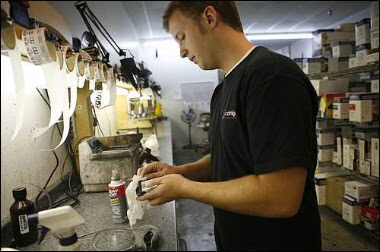 While printer ink cartridges (at least for a home printer) seem like a small thing, Kirk Goodell tells The Detroit News that over 500 million of these items are produced every year, but less than 20% of them are recycled or remanufactured. That number may go up a bit as Goodell’s two-year-old company IQ Cartridge will be have a retail presence established in over 100 Meijer stores around the Midwest by mid-October.

Founded by company president Kristin Kavanaugh and Goodell, the vice president, IQ Cartridges offer something incredibly important to raising levels of recycling: convenience. Currently located in 57 Meijer stores, customers can drop off and pick up ink cartridges, generally with a one-day turnaround. The company also has contracts with a number of businesses in the area, including Eastern Michigan University Computer Center, Ludwig Seeley Commercial Real Estate, and and AllTire, and offers free deliveries (in a subcompact car) to businesses on orders over $50.

While printer cartridges are small things, the revenue projections for the company aren’t: with the growing contract with Meijer, the company expects to see almost $1 million in sales this year… not bad for its second year! The company’s website badly needs some design help, but there’s great information there, including a list of ten misconceptions about remanufactured ink jet cartridges.

While I’m realizing as I read over this that it sounds a bit like a press release, I’m impressed because it looks to me (at least from this one article) that IQ Cartridge has hit upon a couple of truths about green business: first, people will make greener choices if it’s easy for them to do so; second, providing that opportunity to potential customers can be profitable.

Like many greenies, I want more people to take bigger steps towards lowering their environmental footprint. I want to see them give, and perhaps even sacrifice to make the world a better place. But, I also realize that a lot of people don’t have that level of motivation: they’d like to do the right thing, but aren’t willing to make extra efforts. It’s easy to berate; it’s probably more productive to point out the opportunities this creates for creative entrepreneurs willing to meet the needs of these “lazy environmentalists.” If the number of ink cartridges (or glass and plastic botles, etc., etc.) getting recycled increases. that’s still a step forward.