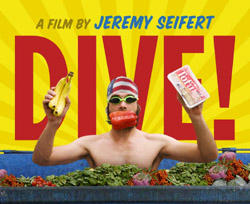 Despite the title, Dive! is not a movie about graceful Olympic divers. Nothing could be further from that image. Instead, it’s a new film about the massive food waste in America, and those who choose to dive into dumpsters to save food from going to the landfill.

In his film, Jeremy Siefert takes on Trader Joe’s and other grocery retailers and raises a challenge: why do so many so-called “friendly neighborhood stores” toss out literally billions of pounds of food every year? Can’t we do something different about this?

…I dumpster dive, which is exactly like it sounds: I jump into dumpsters, pull out not-yet-expired food, and bring it home to my family. Yes, you could say we eat trash—but it’s delicious! It used to be that nearly every meal we ate contained some “trash” in it, like a head of broccoli, fresh ahi tuna, or strawberries….

The documentary [Dive!] showcases a huge problem—food waste. Every year in the United States, we throw away 96 billion pounds of food. That’s 263 million pounds a day, 11 million pounds an hour, 3,000 pounds per second!

All in all, Americans throw out a whopping one-half of the food we produce and import. This wastefulness coexists with a devastating recession and record numbers of Americans dependent on food stamps—one in eight of us, to be exact. Our propensity to waste has now reached beyond our means to do so, and yet we keep up the bad habit even while our neighbors go hungry.

Seifert started a campaign on Change.org asking Trader Joe’s to adopt a company-wide policy to end food waste at all of its 350+ stores. Instead of tossing perfectly good food away, he asks that the company think about donating it to the folks that need it. Sounds a little obvious, no? Well, apparently we need a petition to make it actually happen. So let’s do it!

Want to learn more about food waste in America and how you too can dumpster dive to help save food from going to the landfill? Check out Dive! on DVD, iTunes, and Netflix on its July 19th release date.