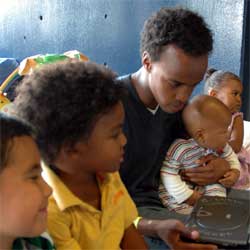 This is National Public Health Week, and the focus is on the impact of climate change on our nation’s health. Knowing about the risks you face will help you better prepare for the dangers.

Do you have children?

Because they are still developing physically, breathe faster than adults and rely on adults for care, children are more vulnerable. Watch out for:

The U.S. population is aging; by 2030 one fifth is projected to be older than 65. Older adults often have frail health and limited mobility, making them more vulnerable to:

Do you have a chronic medical condition?

Pregnant women and their unborn children are particularly susceptible to:

Is your family income on the low end?

An income of $21,200 for four people living in the contiguous 48 states (or $26,500 if you live in Alaska and $24,380 in Hawaii) is considered below the poverty level. Lower-income populations are disproportionately affected by:

Do you live in an area with unhealthy air quality?

More hot days likely mean more smoggy unhealthy-air days. That’s because sunlight and heat spark a chemical reaction between ground-level ozone and other pollutants to form smog. If you live in an area already plagued by smog and soot, be prepared. Exposure to unhealthy air is not good for anybody but is particularly bad if you:

Do you live in a region that is especially prone to harmful climate change?

Some regions of the U.S. may be more affected by particular dangers than others. What can you expect if you live in the following regions?

How you can help