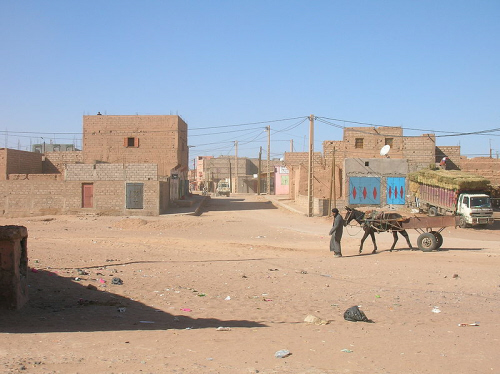 People do not normally leave their homes, their families, and their communities unless they have no other option. Yet as environmental stresses mount, we can expect to see a growing number of environmental refugees. Rising seas and increasingly devastating storms grab headlines, but expanding deserts, falling water tables, and toxic waste and radiation are also forcing people from their homes.

Expanding Deserts around the World

Advancing deserts are now on the move almost everywhere. The Sahara desert, for example, is expanding in every direction. As it advances northward, it is squeezing the populations of Morocco, Tunisia, and Algeria against the Mediterranean coast. The Sahelian region of Africa — the vast swath of savannah that separates the southern Sahara desert from the tropical rainforests of central Africa — is shrinking as the desert moves southward. As the desert invades Nigeria, Africa’s most populous country, from the north, farmers and herders are forced southward, squeezed into a shrinking area of productive land. A 2006 U.N. conference on desertification in Tunisia projected that by 2020 up to 60 million people could migrate from sub-Saharan Africa to North Africa and Europe.

In Iran, villages abandoned because of spreading deserts or a lack of water number in the thousands. In Brazil, some 250,000 square miles of land are affected by desertification, much of it concentrated in the country’s northeast. In Mexico, many of the migrants who leave rural communities in arid and semiarid regions of the country each year are doing so because of desertification. Some of these environmental refugees end up in Mexican cities, others cross the northern border into the United States. U.S. analysts estimate that Mexico is forced to abandon 400 square miles of farmland to desertification each year.

In China, desert expansion has accelerated in each successive decade since 1950. Desert scholar Wang Tao reports that over the last half-century or so some 24,000 villages in northern and western China have been abandoned either entirely or partly because of desert expansion.

China is heading for a Dust Bowl like the one that forced more than 2 million “Okies” to leave their land in the United States in the 1930s. But the dust bowl forming in China is much larger and so is the population: China’s migration may measure in the tens of millions. And as a U.S. embassy report  entitled Grapes of Wrath in Inner Mongolia noted, “unfortunately, China’s twenty-first century ‘Okies’ have no California to escape to — at least not in China.”

With the vast majority of the 2.3 billion people projected to be added to the world by 2050 being born in countries where water tables are falling, water refugees are likely to become commonplace. They will be most common in arid and semiarid regions where populations are outgrowing the water supply and sinking into hydrological poverty. Villages in northwestern India are being abandoned as aquifers are depleted and people can no longer find water. Millions of villagers in northern and western China and in northern Mexico may have to move because of a lack of water.

Thus far the evacuations resulting from water shortages have been confined to villages, but eventually whole cities might have to be relocated, such as Sana’a, the capital of Yemen, and Quetta, the capital of Pakistan’s Baluchistan province. Sana’a, a fast-growing city of more than 2 million people, is literally running out of water.  Quetta, originally designed for 50,000 people, now has a population exceeding 1 million, all of whom depend on 2,000 wells pumping water from what is believed to be a fossil aquifer. In the words of one study assessing its water prospect, Quetta will soon be “a dead city.”

Two other semiarid Middle Eastern countries that are suffering from water shortages are Syria and Iraq. Both are beginning to reap the consequences of overpumping their aquifers, namely irrigation wells going dry. In Syria, these trends have forced the abandonment of 160 villages. And a U.N. report estimates that more than 100,000 people in northern Iraq have been uprooted because of water shortages.

A final category of environmental refugee has appeared only in the last 50 years or so: people who are trying to escape toxic waste or dangerous radiation levels. During the late 1970s, Love Canal — a small town in upstate New York, part of which was built on top of a toxic waste disposal site — made national and international headlines. Beginning in August 1978, families were relocated at government expense and reimbursed for their homes at market prices. By October 1980, a total of 950 families had been permanently relocated. A few years later, the federal government arranged for the permanent evacuation and relocation of all 2,000 residents of Times Beach, Missouri, after the U.S. Environmental Protection Agency discovered dioxin levels well above the public health standards.

While the United States has relocated two communities because of health-damaging pollutants, the identification of more than 450 “cancer villages” in China suggests the need to evacuate hundreds of communities. China’s Ministry of Health statistics show that cancer is now the country’s leading cause of death, and with little pollution control, whole communities near chemical factories are suffering from unprecedented rates of cancer. Young people are leaving for the city in droves, for jobs and possibly for better health. Yet many others are too sick or too poor to leave.

Another infamous source of environmental refugees is the Chernobyl nuclear power plant in Kiev, which exploded in April 1986. This started a powerful fire that lasted for 10 days. Massive amounts of radioactive material were spewed into the atmosphere, showering communities in the region with heavy doses of radiation. As a result, the residents of the nearby town of Pripyat and several other communities in Ukraine, Belarus, and Russia were evacuated, requiring the resettlement of 350,400 people. In 1992, six years after the accident, Belarus was devoting 20 percent of its national budget to resettlement and the many other costs associated with the accident.

When a devastating earthquake and tsunami hit Japan in March 2011, the ensuing nuclear crisis at the badly damaged Fukushima Daiichi power plant forced tens of thousands of people from their homes. Whether they will be able to return or will become permanently displaced is a question that remains unanswered.

Separating out the geneses of today’s refugees is not always easy. Often the environmental and economic stresses that drive migration are closely intertwined. But whatever the reason for leaving home, people are taking increasingly desperate measures. Some of their stories are heartrending beyond belief.

As a general matter, environmental refugees are migrating from poor countries to rich ones, from Africa, Asia, and Latin America to North America and Europe. Some of the largest flows will be across national borders and they are likely to be illegal. The potentially massive movement of people across national boundaries is already affecting some countries. The United States is erecting a fence along the border with Mexico. The Mediterranean Sea is now routinely patrolled by naval vessels trying to intercept the small boats of African migrants bound for Europe. India, with a steady stream of migrants from Bangladesh and the prospect of millions more to come, is building a 10-foot-high fence along their shared border.

Maybe it is time for governments to consider whether it might not be cheaper and far less painful in human terms to treat the causes of migration rather than merely respond to it. This means working with developing countries to restore their economy’s natural support systems — the soils, the water tables, the grasslands, the forests — and it means accelerating the shift to smaller families to help people break out of poverty. Treating symptoms instead of causes is not good medicine. Nor is it good public policy.