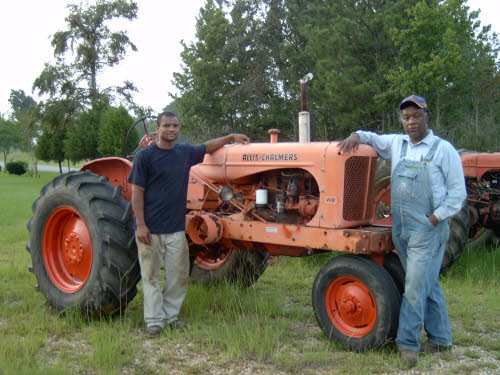 Editor’s note: This is the sixth article in the Harvesting Justice series.

Ben Burkett (above left) is a family farmer and coordinator of the Federation of Southern Cooperatives for the state of Mississippi. He is also president of the board of the National Family Farm Coalition and a member of the food sovereignty commission of Via Campesina, the international network of small farmers and landless people. He gave the following interview one early morning in New Orleans, where he went to deliver a truckload of his cooperatives’ okra to Whole Foods.

The Federation of Southern Cooperatives grew out of the civil rights movement. We are probably 90 percent African American, but we have white, Native American, and Hispanic farmers. Racism is still here in the marketplace and in credit, but we have learned to deal with it and not give up on changing the system. We struggle every day to bring about a change.

We work with co-ops in 16 Southern states. Everything we’re about is food sovereignty, though I don’t think that many farmers in Mississippi really know the term. It’s the right of every individual on earth to wholesome food, clean water, clean air, clean land, and the self-determination of a local community to their rights of intellectual property to grow and to do what they want.

We just recognize the natural flow of life; it’s just what we’ve always done. Like myself, I’m a fourth-generation farmer on a farm that my great-grandfather homesteaded in 1889. That wasn’t but about 20 years after the end of slavery. He got 164 acres from the United States government. I still have the title – they called it a patent – signed by Grover Cleveland. And we’re still farming that same land.

Our view is local production for local consumption. The crops we grow, we sell them mostly within a 300-mile radius of this [Indian Springs Farmers Association-owned] packing facility.

We don’t want a change. We just want to go back to the way things were. It’s just supporting mankind as small farmers and family farmers. It’s not so much a matter of making money, it’s a matter of carrying on so your farm will continue on. But you have to make some profit off it in order to keep it going.

Some say the system is working. It appears to be working fine, but corporate agriculture is not sustainable. Our system of growing food is heavy, heavy, heavy dependent on petro-chemicals, on inorganic compounds, mostly petroleum-based. And then it takes too much control out of the local community. Now, it might last for several decades, but in the end it can’t last.

You’ve got a few companies that want to control all the seedstock of the world, and they’ve just about got a handle on marketing three of the main commodities: corn, soybean, and cotton. It’s hard to find seeds that aren’t treated with the Monsanto-manufactured Roundup Ready. I’ve tried to find cotton that wasn’t treated, but I couldn’t. Now they’re working on controlling wheat and rice.

And they make those seeds so most of them don’t regenerate the next year anyway. But if you do save any of the seeds, Monsanto and the other companies are going to prosecute you for saving their property. Those seeds are patented, the property of the seed company, so they reserve the right to keep them. They’ll take you to court and make you pay back their money. Basically you’re just sharecropping for them, you’re leasing their seeds.

I don’t think that’s fair. Once you’ve bought the seeds and planted them on your own land, it looks to me like they ought to be your own seeds. That’s the essence of life. Where did Monsanto and the other companies get their first seed from? Someone gave them to them. Those seeds didn’t fall out of the sky.

Through the National Family Farm Coalition, we signed onto the protest against the seeds Monsanto sent to Haiti. Developing countries such as Haiti have no need for Monsanto, for hybrid seeds or GMO seeds, no kind of way. Let them use their traditional seeds they’ve been saving for hundreds of years. Let them propagate and then continue to farm traditionally. Because if they get used to buying from America, they’ll lose the diversity of seed that they need in order to build new seed. Normally when those types of seeds and other products from America hit a country, local farmers lose. They get put out of business, they can’t compete.

We’ve been – I don’t want to use the word co-opted – trained by the institutions of agriculture, the companies, the university system, and technology, to give our rights over to the company, which I think is absolutely wrong. We have to be more proactive than reactive as small farmers, family farmers. We can’t wait for the government and large corporations to dictate to us what we can do in our region.

They got a unique way of buying you off to not fight here. The American consumer doesn’t care as long as it’s cheap. But no matter what us farmers plant, the consumer’s got to change the system. People buying the end product have to complain. As long as they don’t complain, there’s no need even talking about it. The marketplace dictates.