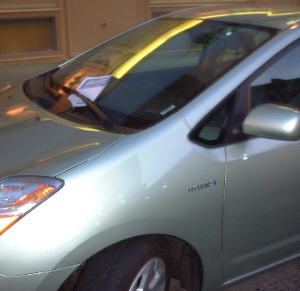 And maybe even win some cash. The folks over at PlanetThoughts kicked off their Super-Cars Shout Out Competition today as a way to recognize folks who are contributing to the fight against climate change by driving a high-mileage car.

The concept is simple: according to the contest site,

We all want to do what we can to reduce the global warming gases that get emitted, especially in our own areas of living and working, where we have the most direct influence. To add another dimension, it would be great to congratulate others who are doing something to help the environment.

To offer your congratulations, print off one of the contest’s flyers, place them on fuel efficient cars you encounter in your day-to-day activities, take a picture, and upload it to PlanetThoughts. The person who uploads the most valid photos wins the contest, and a cash prize of at least $500 (see below). Car owners whose vehicles appear on the site also have a chance at some cash: contact the folks at PT if your car appears in a contest photo, and you’ll be entered into a monthly drawing for $50. The contest runs from today (January 3, 2008) to June 2nd.

Not sure what qualifies as a “high-mileage car?” PT has a list…

David at PlanetThoughts contacted me a while back about the contest; I thought it was a great idea except for one tiny detail (c’mon, you can see it coming): what about the potential waste and litter created by the flyers? In response, he’s encouraging participants to either use recycled paper (don’t forget to look for high post-consumer content) or to reuse the flyer: place your flyer, take your picture, take the flyer back.

As photos start to come in for the contest, I promised David we’d give a shout-out at sustainablog to some of the more creative entries. So look for those a couple of times a month… our standards are high, so don’t just snap and run: shoot to impress.

Congrats to David and team at PlanetThoughts for a great idea… I’m looking forward to seeing the photos that come in.

UPDATE: David and team have changed the winning formula in response to concerns expressed by potential entrants. The contest site now notes that “The winner will be selected using a weighted value calculated from the number of valid uploaded car images from each participant.”