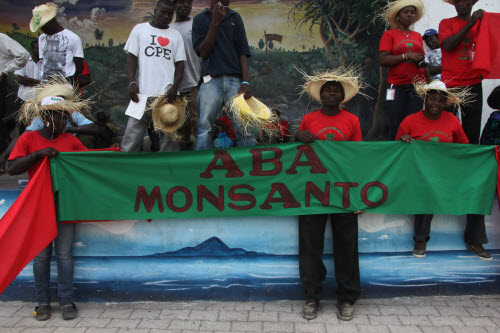 Editor’s note: If you missed any of the other posts in Other Worlds’ Harvesting Justice series, you can find them all here.

Bordering an interstate highway in Arkansas, a giant billboard with a photo of a stoic-looking farmer watches over the speeding traffic. He’s staring into the distance against the backdrop of a glowing wheat field, with the caption “America’s Farmers Grow America.” It’s an image to melt all our pastoral hearts.

Until we read the small print in the corner: “Monsanto.”

The maker of Agent Orange, Monsanto’s former motto used to be, “Without chemicals, life itself would be impossible.” Today its tag line is “Committed to Sustainable Agriculture, Committed to Farmers.” Its website claims the company helps farmers “be successful [and] produce healthier foods… while also reducing agriculture’s impact on our environment.” It even boasts of the corporation’s dedication to human rights.

Behind the PR gloss is a very different picture. Via Campesina, the world’s largest confederation of farmers with member organizations in 70 countries, has called Monsanto one of the “principal enemies of peasant sustainable agriculture and food sovereignty for all peoples.” Via Campesina members also target Monsanto as a driving influence behind land grabs, forcing small farmers off their land and out of work. The agribusiness giants also contribute to climate change and other environmental disasters, outgrowths of industrial agriculture.

Together with Syngenta and Dupont, Monsanto controls more than half of the world’s seeds. The company holds more than 650 seed patents – most of them for cotton, corn and soy – and almost 30% of the share of all biotech research and development. Monsanto came to own such a vast supply by buying major seed companies to stifle competition, patenting genetic modifications to plant varieties, and suing small farmers. Monsanto is also one of the leading manufacturers of genetically modified organisms [GMOs].

Monsanto has filed more than 140 lawsuits against 400 farmers and 56 small businesses for alleged violations of contract or GMO patents. One such case is currently under consideration in the Supreme Court. “Farmers have been sued after their field was contaminated by pollen or seed from someone else’s genetically engineered crop [or] when genetically engineered seed from a previous year’s crop has sprouted,” said the Center for Food Safety.[i] In total, the company has won more than $23 million from these suits. The multinational appears to investigate 500 farmers a year, in estimates based on Monsanto’s own documents and media reports.[ii]

In Colombia, Monsanto has received upwards of $25 million from the U.S. government for providing Roundup Ultra in the anti-drug fumigation efforts of Plan Colombia. Roundup Ultra is a highly concentrated version of Monsanto’s glyphosate herbicide, with additional ingredients to increase its lethality. Local communities and human rights organizations have charged that the herbicide has destroyed food crops, water sources, and protected areas in the Andes, and has led to increased incidents of birth defects and cancers.

On March 26, siding once again with corporations, President Obama signed into law a spending bill with a “Monsanto Protection Rider.” This requires the government to allow GMO crops to be planted before an environmental and health assessment is completed. This means that crops may be planted with the permission of the USDA even if it is not known whether they are harmful.

One Goliath, Many Davids

Farmers and activists are not sitting idly by.

Via Campesina launched a global campaign against Monsanto on International World Food Day in 2009, with marches, protests, land occupations, and hunger strikes in more than 20 countries. The coalition continues organizing international days of action against the company and agribusiness in general. Via Campesina has kept the spotlight on Monsanto at its global protests, such as the 2012 UN Climate Change Conference in Bangkok.

One of the rejections of Monsanto occurred in the small village of Hinche, Haiti in June, 2010. There, thousands of farmers burned Monsanto seeds. The Haitian Ministry of Agriculture had given Monsanto permission to import and ‘donate’ 505 tons of hybrid corn and vegetable seeds. “It’s a declaration of war,” said Chavannes Jean-Baptiste, director of the Peasant Movement of Papay (MPP). The importation of massive amounts of hybrid seed threatens the traditional, regionally adapted seed stock of Haiti, as it does in many other countries. Hybrid seeds also cause a cycle of dependence, with farmers buying them from Monsanto each year rather than relying on local markets or their own saved seed. In an open letter, Jean-Baptiste called the entry of the seeds “a very strong attack on small agriculture, on farmers, on biodiversity, on Creole seeds…, and on what is left of our environment in Haiti.”[iii]

The same day as the protest in Haiti, activists in Seattle gathered in solidarity. They burned Monsanto seeds in front of the headquarters of the Gates Foundation, which is promoting GMO seeds in Africa. In Montana, the home state of Monsanto’s world headquarters, activists dressed in lab coats and Tyvek to demand that Monsanto “seeds of dependency” be kept out of Haiti. In Chicago, a Haiti support group did not have Monsanto seeds, so they burned Cheetos instead. The Organic Consumers Association’s network sent more than 10,000 emails protesting Monsanto’s ‘donation’ to USAID and President Obama. African-American farmers in Mississippi mobilized letters to the White House, too.

Around the world, farmers and activists have long taken it upon themselves to destroy Monsanto’s GMO crops. Groups have cut down or pulled up fields of corn, potatoes, rapeseed, and other crops, sometimes laying them at the entryways of government buildings where they are demanding anti-GMO legislation. In 2003 in the state of Paraná in Brazil, activists uprooted plants at one of Monsanto’s experimental labs. They went on to file and win a land reform claim, and then started their own agroecology university on the site.

In the U.S., the Organic Consumers Association has spearheaded the “Millions Against Monsanto” campaign, demanding that the company stop intimidating small family farmers and forcing untested and unlabeled genetically engineered foods on consumers. The campaign works to unearth information about Monsanto’s practices, push legislation to limit corporate power, and disseminate research and action items through its extensive network. Occupy Monsanto has also held a number of actions around the country. This week, starting April 8, groups from around the country are gathering in Washington, D.C. for Occupy Monsanto’s “eat-in” at the FDA, demanding GMO regulation and an end to corporate influence in food policy.

In 2012, the Organic Seed Growers and Trade Association gathered enough signatures for a ballot initiative (Prop 37) in California to mandate labeling of products containing GMOs. Their hope was that forcing companies to label in California, the eighth-largest economy in the world, would prompt countrywide labeling. Companies poured money into defeating the measure, the largest donors being Monsanto (about $8.1m) and DuPont (about $5.4m). Also donating millions were companies that own major organic labels like Kashi (Kellogg Company), Horizon (Dean Foods), Odwalla (Coca-Cola), and Cascadian Farms (General Mills). The measure failed by a tiny margin, causing the anti-GMO movement to redouble its efforts. Labeling laws have been proposed in more than 20 other states and are currently under consideration by legislators in Vermont and Washington.

In 2011, the Organic Seed Growers and Trade Association – together with 82 other plaintiffs, including agricultural associations, seed companies, and farmers – brought a lawsuit against Monsanto in Manhattan federal district court to establish protections for organic farmers whose crops are contaminated by GMOs. The court ruled against them, but the plaintiffs appealed and are currently awaiting a ruling.

Back in the rural Haitian town of Hinche on March 22 of this year, the same peasant farmer group that had burned Monsanto seeds held another demonstration. Holding banners reading “Down with Monsanto,” they demanded an end to corporate tyranny of agriculture. Allies from many countries in Latin America, North America, Europe, and Africa joined them in that dusty town, recommitting themselves to a world with food and seed sovereignty.

[i] Andrew Kimbrell and Joseph Mendelson, Center for Food Safety, “Monsanto vs. US Farmers,” 2005.