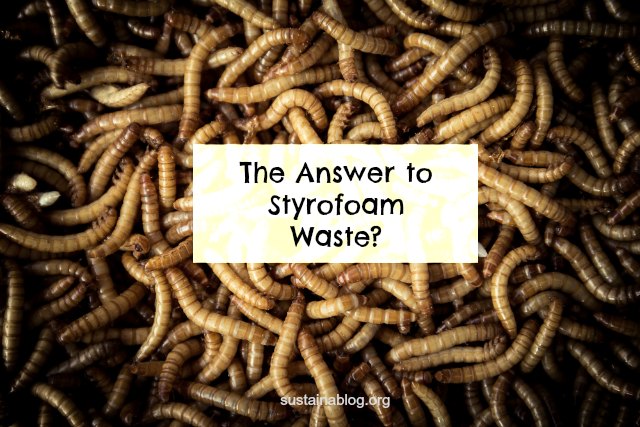 Polystyrene, the plastic in Styrofoam and other number 6 plastics, is recyclable, but the economics of doing so make it really problematic. That’s why you probably can’t put these materials into your recycling bin. It turns out that the answer to taking care of this waste – other than not using it, of course – may not be technological, but natural: researchers at Stanford have discovered that mealworms – the larvae of the darkling beetle – can not only eat the stuff, but their excrement can be used as crop fertilizer.

It turns out the mealworm has a microbe in its gut that allows it to do something we’ve yet to figure out: biodegrade Styrofoam. And the little buggers can exist solely on the plastic: “Mealworms fed a steady diet of Styrofoam were as healthy as those eating a normal diet, [lead researcher Wei-Min] Wu said…” And while you wouldn’t want to put polystyrene foam on crops for fear of chemicals leaching, the waste from the worms is apparently safe for those same crops.

So, problem solved, right? Just toss mealworms on that Styrofoam, and let them feast? Maybe…

Should We Count On The Mealworm To Deal With Our Styrofoam Waste?

While Wu notes that the findings of this study “…have opened a new door to solve the global plastic pollution problem,” he and his fellow researchers still have plenty of questions to answer. While the worms  have stayed healthy on their plastic-only diet, will that continue? What about next generations of mealworms and beetles? What about the animals up the food chain that eat the worms?

The same kinds of long-term questions will have to be studies for use of plastic-fed mealworm waste on plants and crops. Are there any signs of inorganic pollutants showing up? Are the animals and people eating the grains, vegetables, and fruits fertilized with this material developing any health issues?

A final question that these researchers are already brought up: what about all of the #6 pollution in the ocean? Is there a marine species that can do the same thing as the mealworm?

No doubt, the manufacturers of polystyrene products will trumpet this study, but it’s still too early to herald mealworms as solutions to the problem of Styrofoam waste. The most obvious answer still seems to be reduce our use of this material… or to take the findings of this study, and others like it, into the lab, and, eventually, the factory to create plastics with built-in biodegradability.

Got thoughts on this study? Got more insight than I do? Share your thoughts in the comments…