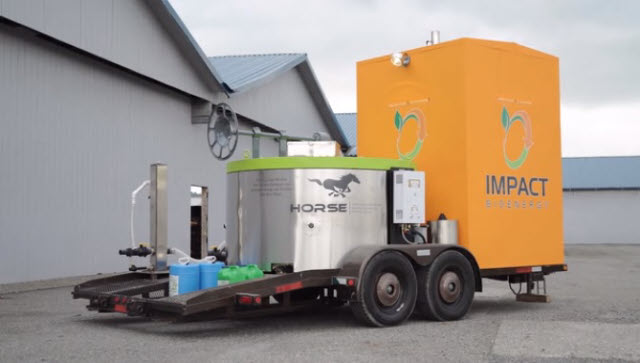 Just over a month ago, I took a look at the argument that a landfill augmented with technology for capturing biogas may be a better alternative for organic wastes than separate pick up and composting/anaerobic digestion. I’m still not totally convinced by this argument (especially when, as a commenter pointed out, the value of the compost created is taken into account). A new technology (or, technically, a new take on an older technology – the anaerobic digester) that just came across my radar could make such arguments irrelevant: the HORSE, or “High-solids Organic-waste Recycling System with Electrical Output” system. This on-site organic waste to energy plant eliminates the need to transport materials to convert them to energy and fertilizer.

This isn’t a machine designed for single homes or businesses: the HORSE’s capacity works for small communities, larger institutions, or businesses that create a high volume of organic waste (think popular restaurants). According to Impact Bioenergy, the company that’s created the HORSE (and is running a crowdfunding campaign for it):

It will consume 25 tons per year of food scraps, beverages, fat, and paper products. It can create 5,400 gallons per year of liquid fertilizer + up to 37 MW-hrs of raw energy. As renewable gas that’s 125 Million BTU per year (4.3 MW-hrs of this energy is electrical output). The system also has accessory valves for BBQ grills, fire pits, lights, and ovens. How cool is that?

Very cool, I’d say! The HORSE is still in its prototype phase: the $30,000 Impact Bioenergy is trying to raise will fund demonstration versions of the machine (hopefully, two of them).

While the HORSE costs just over $43,000, the eventual commercial version might be a good investment for the right sized off-grid community – the combination of energy and organic fertilizer seems ideal for these kinds of settings. Take a look at the Kickstarter project video above, and then let us know what you think. And if you’d like to contribute to the cause, don’t wait around – this project only has a few more days left to hit its funding goal.