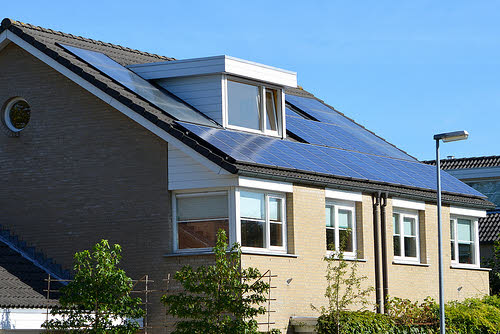 Way back in 2006 (as a few of you may remember), David Anderson, Shea Gunther and I started Green Options (a brand now owned by Huddler). Our business concept wasn’t solely focused on publishing content at that point; rather, we wanted to build an online marketplace for home solar shopping. We envisioned a site that could provide the initial information you needed to make a decision, and connect you with both installers that could do the job for you, and financial services for paying for a system.

Ultimately, we failed with this plan: the technical requirements for such a site were pretty intense, and, quite frankly, we were all content folks at heart. Even spinning off a separate company focused on this goal wasn’t enough to make it happen at that point. So, I’m always interested to see what others may be doing on this front, as I still think it’s a solid business idea.

Geostellar is the latest offering on this front, and after playing around with it just a bit (I didn’t go as far as creating a profile), I’m pretty impressed with what they’ve done. Without signing up for anything, I was able to check out the solar potential of my home (which I knew was pretty low), the possible cost savings of either buying a system or going with a leasing option (or a PPA for those of you in the know), the energy generation potential, and the amount of greenhouse gas emissions we’d avoid. I could have also chatted with a sales rep. Had I signed up, I’d have been able to compare installation and financing options, and even join an affiliate program.

You don’t create such a service alone; Geostellar has partnered with a range of other companies, ranging from solar leaser SolarCity to Admirals Bank, and created a mobile version of their marketplace (which is only available on the iPhone). Looks like there are opportunities for installers to join their network, too.

I’m impressed – we had big dreams seven years ago, but Geostellar’s made it happen… and I know it’s no easy feat. Have you already tried out the marketplace, either on your computer or mobile device? Gone further in than I did? Let us know what you thought…