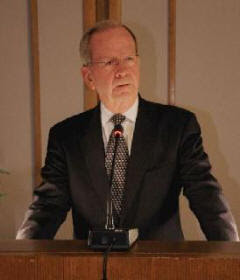 For those of us old enough to remember Robert McFarlane‘s time in the Reagan administration as assistant to Secretary of State Alexander Haig and National Security Advisor, we’re likely to associate the man with one thing: Iran-Contra. McFarlane’s back in the spotlight these days, but rather than fighting communism, the senior statesman is hawking renewable energy as a smart choice for both environmental and national security challenges.

At a renewable energy summit hosted by Colorado Senator Ken Salazar on Friday, McFarlane warned that our “addiction to oil” creates a chink in our armor that, if exploited, could wreak economic havoc. According to the AP,

McFarlane… said an attack last year on a Saudi oil terminal was a warning of what could happen if terrorists carry out their threats to go after oil supplies.

He said a truck filled with explosives came within 100 yards of the oil terminal before it was stopped. Had the attack succeeded, it would have knocked out a terminal that supplies 6 million barrels of oil a day for a year, tripling the cost of a barrel of oil to $150 a barrel overnight.

“They came within 100 yards of taking 6 million barrels a day off the market for a year,” said McFarlane, who now runs an energy investment company.

McFarlane said Japan, which is heavily dependent on oil from the Persian Gulf, would have been the first to see its economy collapse if the attack had succeeded. He said there are a dozen terminals at risk in Saudi Arabia alone.

Of course, oil comes from other regions of the world, but, as McFarlane noted, there are problems in those places, also: both Venezuela and Russia are exerting state control over oil supplies, for instance. The US places its energy and economic security at risk by not moving forcefully into renewable energy development… development which can occur fairly quickly with technology we already have.

McFarlane also mentioned climate change in his address, and there’s no doubt that there are real security and economic threats poised by the climate crisis. The strength of the “energy hawk” argument, though, lies in its ability to show that climate change skeptics still have good reason to be concerned about our reliance on oil and gas, and typical methods of increasing security won’t cut it — I can’t think of any form of military action that could stem this. We also can’t rely on the market in this case, because China and India have hit “superpower” status in terms of energy consumption, and they’ll continue to provide competition for dwindling supplies.

The flip side of this coin, though, is the economic potential that exists in building more renewable infrastructure. If you haven’t already, take a look at Clean Edge’s annual report on clean energy trends .