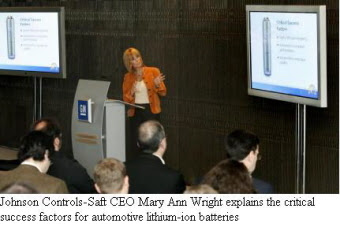 As I noted last week, General Motors new Chevy Volt concept vehicle has received quite a bit of fanfare around the green blogosphere; as we also saw from some of the comments that post [at Green Options] received, the company’s claim that it must develop an automotive lithium-ion battery to move the Volt to production has met with its share of skepticism. The media event I attended last Monday was aimed, in part, at skeptics — the company wanted to make its case for choosing this particular path, including the reasons for developing new battery technology instead of taking advantage of current nickel metal hydride batteries common to most hybrid vehicles.

While our breakfast meeting with Larry Burns was small and relatively casual, GM had a thorough formal presentation planned for the larger group of reporters and writers that gathered later in the morning. Joining Beth Lowery, GM’s VP of Energy and Environment, were Denise Gray, Director of Hybrid Energy Storage Systems for GM, and Joe LoGrasso, the Engineering Group Manager in that same division. Also present were representatives of the companies GM has contracted with in developing li-ion batteries for its “E-Flex” concept: Mary Ann Wright, CEO of Johnson Controls-Saft, Ed Bednarcik, VP and General Manager of A123Systems, and Scott Lindholm, VP of Systems Engineering for Cobasys. The presentations by all of these executives came together around two common themes: 1) the li-ion automotive battery is necessary for the E-Flex concept; 2) the combination of talent and experience GM had brought together can make it happen.

The advantages of li-ion batteries include:

To put this in terms that apply to most people’s driving, a NiMH battery in the space alloted for a battery in the Volt would provide a 25-30 mile range in electric-only mode, and not provide the power most consumers want — according to engineers that addressed this for me later by email, “The 0-60 would be unacceptable. The owner would also have issues with being able to drive up hills.” An li-ion battery, on the other hand, could provide a 40-mile electric-only range with the power most car owners expect. Wright also noted that lithium-ion batteries provide more power with less space and weight, which translates into cost savings. Challenges still exist, of course, including cold temperature performance (mentioned here), as well as life span, robustness & abuse tolerance, the more sophisticated electronics needed to maintain li-ion cells, and the initial costs of the batteries and battery packs before production can be ramped up to a scale that will bring prices down.

The questions asked by readers at Green Options also came up during the Q&A period — why not go with the technology currently available and upgrade as necessary? The company stuck to its story — li-ion is necessary to create a plug-in hybrid that meets the power and energy expectations of most consumers.

So, is it? GM and its partners made a complex case for this technology — we’d love to hear why you think they’re right or wrong.

For other takes on this presentation, visit Autoblog Green, Evolution Shift, and EcoWorld.