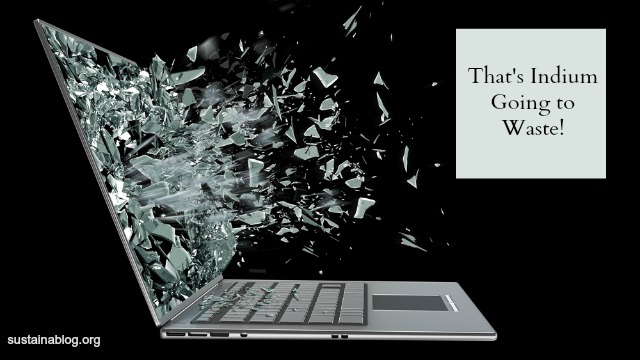 If I asked you to name five metals, you probably wouldn’t have any problems – aluminum, silver, and iron probably would appear on everyone’s list. But indium? Unless you’re a chemist, or you’ve been involved in engineering various next generation glass products, you may be scratching your head at this one. Indium’s used in pretty narrow settings, and its also relatively rare (which may explain the former point).

Odds are, though, that you own an item containing indium. If your smart phone, tablet, monitor, or television have a liquid crystal display (LCD), it likely contains “…thin films of indium tin-oxide that act as transparent conductive coatings in the displays.” Because we send so many of our used electronics to landfills rather than recyclers, indium supplies are already threatened. Finding a means to recover and recycle this metal is critical to continued development and production of LCDs.

Scientists Xianlai Zeng, Fang Wang, Xiaofei Sun, and Jinhui Li from China’s Tsinghua University have published results of research they’ve done on this topic. According to the American Chemical Society:

The researchers performed 18 experiments to find the optimal conditions for coaxing indium from LCDs. The most effective technique involved crushing and grinding LCD glass into particles less than 75 micrometers, or 0.003 inches, in size and bathing them in a sulfuric acid solution at 122 degrees Fahrenheit. These and other key parameters, the scientists say, could contribute to a closed-loop process of indium recovery that could allow the display industry to get indium from discarded electronics rather than using dwindling reserves.

Those “dwindling reserves” could be as little as 14 years worth of the metal, so this isn’t just feel-good environmentalism; rather, industries that rely on this material could be out of luck.

Know more about indium’s used in various kinds of products? Or about the state of current reserves of the metal? Share your knowledge with us in the comments.