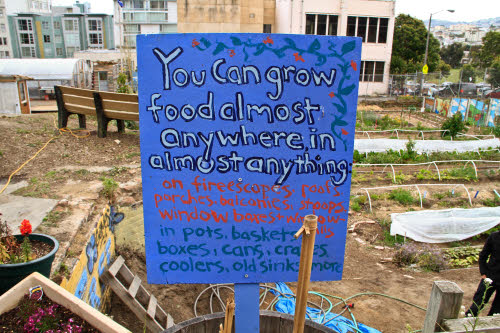 Editor’s note: When Dan Susman first reached out to me about giving some attention to his documentary on urban agriculture, he offered to write a guest post… and I took him up on it! Dan and film making partner Andrew are getting really close to their fundraising goal, so if you’re intrigued by their work after reading this post, consider kicking in a donation.

After traveling to more than twenty cities and visiting over eighty urban farms across the country for my documentary film, Growing Cities, you’d think I’d be able to sum urban farming up in one sentence; be able to say exactly what it is, who does it, and why. But, I can’t. I’ve met tons of city farmers, from backyard chicken keepers to community gardeners, and seen people growing food in the most unlikely of places. Nonetheless, I still can’t find a neat and tidy way to describe the urban agriculture movement.

Growing Cities follows my friend Andrew and I on our journey across country meeting people who are revitalizing their cities by growing food. The film is currently in post-production and we are raising money for its completion via Kickstarter.com (only a few days left to reach our goal – you can watch our trailer and make a pledge here). Our goal with the film is to inspire and empower people to grow food no matter where they live or what type of experience they have.

But let’s get back to definitions. The best I can do is urban farmers are people growing food in the city. And that is quite obvious. So obvious, that I rarely define it at all. When Andrew and I set off to make this film over a year ago, we thought we knew what we getting ourselves into. We had read about, watched, talked to, and generally harassed nearly every urban farmer we could get a hold of. But what you don’t get from all that is the feeling on the ground; how the vibes from one city to the next or even one block to another are so diverse.

And it’s these diverse stories which make Growing Cities more than just another foodie movie but a tale of both farmers and of the American spirit during rough times. We meet both everyday people and farmers on the cutting-edge of this revolution, showing that anyone anywhere can grow food. We found this grassroots movement takes many forms – from those growing food in backyards to make ends meet; to educators teaching kids to eat better; to activists seeking a meaningful alternative to the industrial food system, and more.

Alone these reasons why people are growing food are compelling. However, it’s their synergy that makes this movement so resilient and what attracts people of every age, race, and socio-economic background. And let’s be honest, it sure doesn’t hurt that what they are growing is food – the object that has bound us together since the beginning of our existence.

Yet, what’s most exciting to me is that urban farming allows people to re-imagine what’s possible in cities. City farmers challenge us to get beyond the urban-rural divide and really think about how we can all be producers in a society that is driven by consumption. It might be this quality more than anything else that is capturing so many people’s hearts and minds.

I don’t think I’ll ever really arrive at a neat and tidy definition of urban farming. That said I can tell you what it is – a backyard garden, a mom concerned about what her kids are eating, a tomato in a windowsill, an organizer demanding access to fresh food for her community, and everything in between. Together, these parts make a movement; one that is creating Growing Cities across the country – communities that are healthier, more sustainable, and socially just. The only question left is, “What are you growing?”

Dan & Andrew are currently running a Kickstarter campaign and need to raise $5,000 in the next week to complete their film. Watch their trailer (and make a pledge) here.