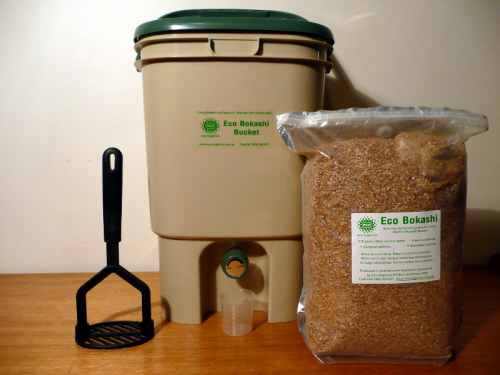 When I was a kid, composting was a two-step process. First, we piled food scraps in a tub under the sink and waited for them to get slimy and putrid enough to attract flies. Then we held our noses, carried the food scraps outside, and dumped them onto a rotting heap that served mostly as a buffet for the local rats.

Well folks, we’ve come a long way since then.

Bokashi composting is also a two-step system, but one that eliminates many of the usual drawbacks of home composting. It’s very simple: as you collect food scraps in a bucket, you add a special inoculation of effective microorganisms – bacteria and yeast – which immediately begin an anaerobic fermentation process and prime the scraps to become compost. A week after the bucket is full, the fermented scraps are ready to be buried in your garden or planter box, where soil microbes, earthworms, and other decomposers will complete the composting process in about 10 days. This system provides many advantages:

How to Make Bokashi

To read lots more, check out the blog on Bokashicycle.